Knowledge of deposition characteristics in the human airways is important when assessing the impact of inhaled aerosols, which can be either atmospheric pollutants or aerosols intended for therapeutic purposes. Not only the total deposition, but also local depositions within individual parts of the lung are of interest. Aerosol transport is determined by the airflow characteristics in the human airways. In particular, aerosol deposition in the upper airways is mainly attributed to inertial impaction which in turn is associated to forces exerted on the particles by the flow. In addition, the transition to turbulent flow causes deposition of particles due to turbulent dispersion. The application of computer models that are based on computational fluid dynamics for the prediction of airflow and deposition in the human airways has become very common nowadays. Despite their limitations, which are mainly associated to their high computational cost, CFD models offer significant advantages over in vitro / in vivo experiments. However, prior to their use CFD models need to be properly validated. This is the objective of the current application challenge. Specifically, flow measurements using Particle Image Velocimetry (PIV) have been conducted in a human-based model of the upper airway during steady-state inhalation at a flow rate of 60 L/min. The flow conditions at these flowrates are in the transitional to turbulent regime. CFD simulations were carried out in the same geometry and under the same ventilation conditions. Large Eddy Simulations using three different approaches and Reynolds-Averaged Navier-Stokes simulations were carried out.

The present AC is associated to AC7-01: “Aerosol deposition in the human upper airways” of Application Area 7: Biomedical Flows, which presents experimental and numerical results for deposition in the same geometry. The methods and results described in the present Application challenge are mainly adopted from Janke et al. (2019) (experimental part) and Koullapis et al. (2018) (numerical part), reporting on work carried out in COST Action MP1404 SimInhale ‘Simulation and pharmaceutical technologies for advanced patient-tailored inhaled medicines’. http://www.siminhale-cost.eu. 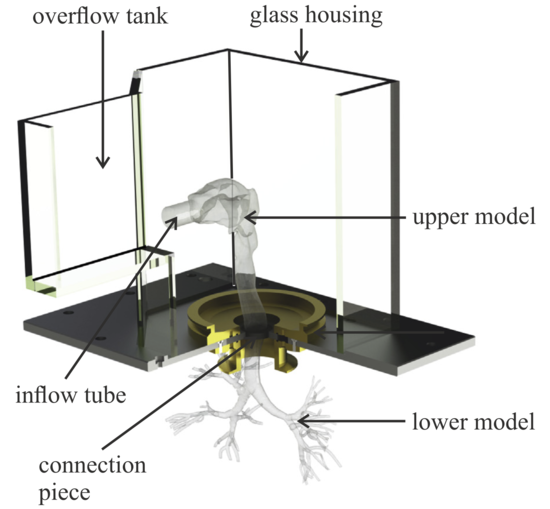