The computational work of Manna et al. (1997) was chosen because it is consistent with the previously presented experimental results. Their computational results are split into two categories: the first one contains the steady state simulations and the second one unsteady simulations corresponding to the experiments of Cicatelli and Sieverding (1997).

The steady state results, namely the surface pressure distribution on the blade, the mid-span isentropic Mach number distribution and the boundary layer velocity profiles are presented in Figure 3, Figure 4 and Figure 5 respectively. The solid lines denote the computational results and show very good agreement for all the three distributions.

It is, probable that the very neat wake is mainly dictated by the boundary layer characteristics at the trailing edge, and consequently by the separating shear layer attributes. In Figure 8 the computed instantaneous density fields is presented, in an attempt to documents the initial stages of formation and evolution of the vortex street. Figures 8a,b illustrate the pressure side vortex birth, whose center appears to be at 0.8 trailing edge diameters downstream of the blade. The growing vortex approaches the suction side shear layer (Figure 8a,b) and entrains fluid from if (Figure 8c,d),as indicated by the curvature of the suction side shear layer to the wake center. This appears to coincide with the beginning of the weaker suction side vortex (Figure 8e,f). The entrainment of the fluid from the opposite shear layer continues until the pressure side vortex shed off (Figure 8g,h) and the formation of new starts. The same behavior of vortex shedding can be observed from experiment at Schlieren photograph.

The unsteady results were captured by the pressure signal; collected from the trailing edge circle, see Figure 9. The FFT analysis showed that a vortex shedding frequency of 2.35 KHz was slightly lower than the experimentally detected one, namely 2.65 kHz. Quantitative information concerning the unsteady flow features have been obtained by means of spectral analysis of the pressure signals.

Figure 9: The pressure signal collected from the trailing edge circle

The numerical density fields (see Figure 8) confirm that the asymmetric nature of the wake and the vortex shedding arises from the different characteristics of the trailing edge boundary layers on the two sides of the blade. No interpretation on the flow inside the unsteady wake could be done because only an algebraic mixing length turbulent model was used.

In Figure 10 the time history of the pressure data was is shown for four location around the trailing edge. The periodic character of the pressure oscillations is clearly highlighted. There is a marginal increase of the pressure variation at the pressure side locations, with respect to the suction side. The good quality of the phase averaged numerical data confirms the repeatability of the signal, and indicates that the dominant frequency is resolved by the computations. 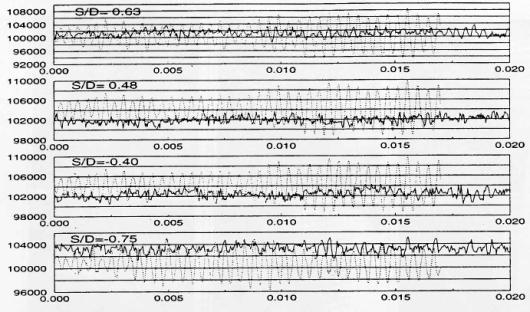