CFD simulations were performed with the StarCD package to determine the effect of the flow rate of the air supply on temperatures and air speeds within the office space. Two sets of simulations were completed:

• CFD2: post-occupancy simulations, completed once the office had been occupied and the measurements had been taken.

Inlets representative of swirl diffusers were applied to the floor in the CFD model and outlets representative of the slot in the ceiling. The office space also had internal heat gains from people, computers and lighting. The methods of modelling the swirling jet flow emerging from the swirl diffusers and of specifying the thermal boundary conditions and internal heat gains within the office space were important elements of the simulation that are described in subsequent sections.

All simulations had the following characteristics:

• Flows are assumed to be steady state

• The two-equation k-ε turbulence model set as standard in the StarCD code is used. This model accounts for some effects of buoyancy. The codes standard wall functions were used at the solid domain boundaries (see StarCD Methodology Manual pp2-7 for full details).

The two sets of simulations differed in the detail of the computational grid (the post occupancy tests were 6 times more refined) and in the specification of the internal heat gains and the thermal boundary conditions. The same assumptions were used for the convective and radiative heat loads, the only difference being the temperatures set at the walls. The inlet supply temperature was set at 18oC for all simulations.

StarCD version3.0 was used to carry out the CFD analysis. StarCD solves the RANS equations for momentum, enthalpy, turbulence energy and turbulence dissipation rate using the buoyancy modified standard two-equation k-ε closure model, based on the SIMPLE algorithm. Upwind differencing was used to discretise the momentum equations while central differencing scheme was used to discretise the density. The air density was determined from the local temperature based on the ideal gas law. A full description of the equations solved as well as the numerical discretisation scheme and solution algorithm used in StarCD can be found in the StarCD manual.

CFD simulations have been carried out for three values of the supply air flow rates equivalent to 1.5, 2.0 and 3.0 air changes per hour (Scenarios 1, 2 and 3, respectively).

Figure 2 shows the computational domain and the inlet and outlet boundary conditions. The domain agrees closely with the geometry of the completed building, although furniture and structural columns were not represented. These were omitted for simplicity, since it is expected that the positioning of the furniture should not alter the overall air flow movements, even though some local interference is likely to occur (e.g. a piece of furniture placed near or directly above a swirl diffuser).

The modelled space is 36m long, between 14 and 25m wide and 3.1m high. The maximum cell dimension is 1m. All cells are 0.1m high, which corresponds also to the smallest cell width. Mesh density was increased close to the swirl diffusers. The computational mesh is made up of 58,342 fluid cells. The mesh geometry is illustrated in Figure 5 below. The file pre_occ-case1.dat contains a list of the cell numbers and the (x,y,z) coordinates of the centroid of each cell for the CFD1 simulations. 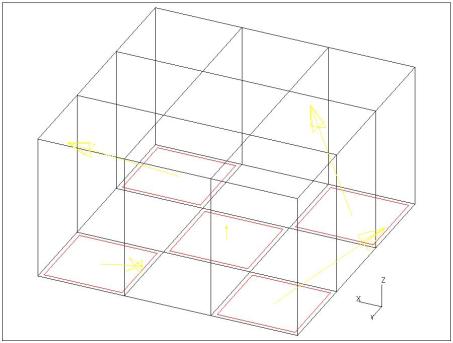 • No slip conditions were applied at the floor walls and ceiling using standard k-ε wall functions. The walls were assumed aerodynamically smooth.

• Air is injected into the office space through swirl diffusers mounted in the floor. Due to high geometrical complexity of the swirl diffusers, a simplified representation was used consisting of a set of inlets. A reasonable representation is ensured by considering a single swirl diffuser in isolation and comparing the predictions with air temperatures and flow patterns reported from manufacturer’s experiments. A representation of the swirl diffuser is shown in Figure 6. The representation consists of a central upwardly directed inlet surrounded by four angled inlets to generate a swirl. Air is injected across an area of 0.18m by 0.18m, which matches the ‘free open area’ of the Krantz 200mm swirl diffusers in the actual rooms. By varying the angle of the “swirl” to the horizontal and the ratio of air flow rates through the central upward inlet and the corner “swirl” inlets, it was possible to match air flow patterns and temperature profiles for a single swirl diffuser with manufacturer’s published data. Optimal values in this case were found to be 36° to the horizontal and a ratio of upward/total swirl flow of 0.07. The turbulence intensity at the inlet was set to 10% and the turbulent length scale was set to 0.005m.

• Air exited the space through a zero gradient outflow boundary along a strip in the ceiling of the office space.

• Temperatures at the surfaces were fixed using thermal analysis software (Oasys Ltd.’s ROOM program), which solves the radiation and assumes a well mixed temperature profile within the office space. This procedure yielded values shown in Table 1. The wall temperatures are coupled to the air temperatures through a convective heat flux parameterised as

where hc is the wall convective heat transfer coefficient, which is set to 3.0W/m²K, A is the area of the wall in the cell, Ts is the specified surface temperature, and T is the air temperature within the first cell. The hc setting is a mean value for all surfaces (alternatively local values could have been calculated within the CFD)

The air was subjected to internal heat gain as follows (as discussed in the Test Data section):

No mesh refinement studies were conducted – the maximum practical mesh density at the time of the analysis was used. The convergence criterion is based on the default STAR-CD normalised absolute residuals all reducing to less than 10-3 (STAR-CD uses a scaling factor which is representative of the flux of the transported variable through the computational domain as a default normalisation factor - see the STAR-CD Theory manual for more details).

Results from the CFD1 simulations data are available in ASCII format in the files pre_occ-case1.dat, pre_occ-case2.dat, pre_occ-case3.dat. The file contains the cell number, the coordinates, in metres in the coordinate system shown on Figure 1, of their respective centroid (where the values of variables are calculated at), the u-, v-, and w- components of the velocity vectors in m/s, and the temperature in degrees Celsius.

A CFD simulation was carried out after the completion of the test measurement programme. Measured values for the boundary temperature, which are listed in Table 2, were used to fix the boundary conditions at each wall. These measured temperatures were used to calculate the heat flux into the space from the walls using the same method used in CFD1. A single supply air flow rate was modelled, equivalent to 2.0 air changes per hour. The numerical grid in the CFD2 (approximately 350 000 cells) was much finer than in CFD1 (approximately 60 000 cells). Otherwise the computations were the same.

The domain modelled in the post occupancy simulations was the same as in the design stage simulations, but the grid was refined, particularly close to the walls and near the inlet swirl diffusers. The maximum cell dimension is 0.35m. Most cells are 0.25m high, the smallest cell dimension is 0.02m (close to the inlets). The compressed file post_occ.zip (9.3MB) expands to a file post_occ.txt (35 MB) containing the (x,y,z) coordinates in m of the centroids of the grid cells.

Dynamical boundary conditions were similar to those in the design stage CFD. The difference was that the higher resolution at the inlet conditions in the swirl diffuser, see Figure 7.

Thermal boundary conditions are also set in the same way as in the design stage CFD except that the surface temperatures are specified from the measurements on 25/04/01 at 16.00 hours. The CFD1 design stage model was carried out for worst case scenario conditions for a hot summer day. However, the monitoring took place during spring time, so it was decided to choose the hottest day of the monitoring to replicate the design conditions as closely as possible. The values are listed in Table 2. The wall convective heat transfer coefficients were set again to be 3.0W/m²K.

The same physical models as for the design stage CFD model were applied.

The same numerical accuracy as for the design stage CFD model was applied.

The compressed file post_occ.zip (9.3MB) expands to a file post_occ.txt (35 MB) containing the cell number, the (x,y,z) coordinates, in metres of the centroids of the grid cells (where the values of variables are calculated at), the u-, v-, and w- components of the velocity vectors in m/s, the velocity magnitude in m/s, and the temperature in degree Celsius.