Firstly, consider the three-dimensional flow that develops near the bottom (and analogously near the top) of the duct with the aid of secondary velocity vectors and contours of turbulent kinetic energy at 45° in Fig. 2. The pressure gradient in the curved section drives low-momentum flow near the floor towards the left, inner wall, generating a large clockwise-rotating vortex. This motion enhances the vortex with clockwise rotation and annihilates that with anti-clockwise rotation of the initial pair generated by the wind tunnel contraction. This explains the apparently scrambled secondary velocities seen in Fig. 2. The fine-grid computations in which the initial vortex pair is well accounted for (e.g. EDF, U. Brussels, U. McGill and Chalm) show a consistent “clover leaf”-like structure with the initial clockwise-rotating vortex sitting on top of the pressure-driven boundary-layer motion. This picture is less clear in the experiments, possibly because of the lower resolution. 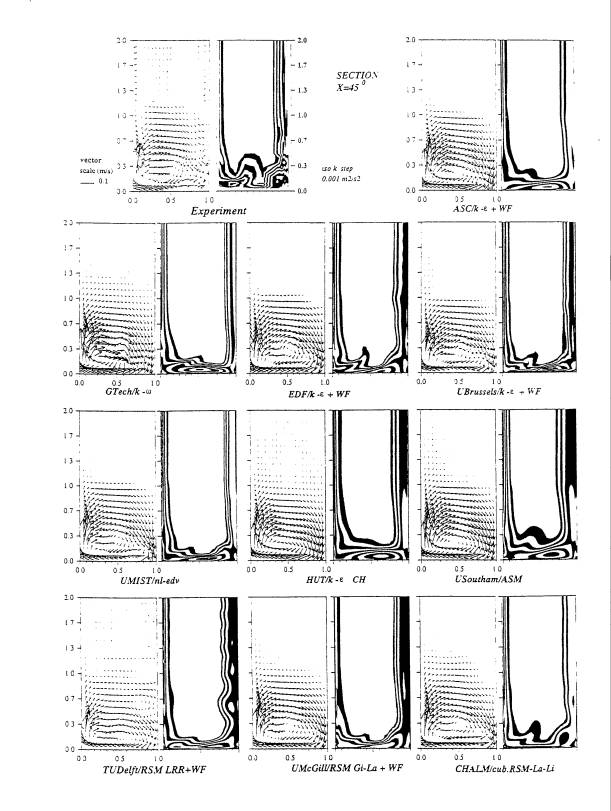 As already indicated by the results at 45° shown in Fig. 2, the secondary flow vectors at 75° (Fig. 3) reveal that the wall-jet type behaviour of the secondary flow on the inner wall is generally better reproduced by Reynolds stress models than by eddy viscosity models, which yield a turning of this flow away from the wall much closer to the corner than observed in the experiments. The ASM and the cubic RSM are found to best predict the tongue of k, penetrating in the experiments from the bottom wall into the core through the upward motion of the vortex pair.

Away from the top and bottom walls the nearly 2D boundary layers on the inner and outer walls develop a strong asymmetry due to the different pressure gradients and curvatures prevailing. The boundary layer on the inner wall becomes thinner and k is reduced, while on the outer wall, it becomes thicker and k is increased due to the effect of concave curvature. This trend is simulated fairly well, as can be seen from Fig. 4 showing examples of k-profiles at 45°. There is in fact little difference between the various model types, and the figure reveals that the fairly high values of k measured near the outer wall with concave curvature are not reached by any model, including the RSM which is expected to account properly for curvature effects. These high levels may be due to Taylor-Görtler vortices, and the RSM calculations of TU Delft show instabilities, which indicate that there is a tendency towards such vortices in these calculations. A careful time-dependent simulation (without a symmetry plane condition) would be required to check this point. 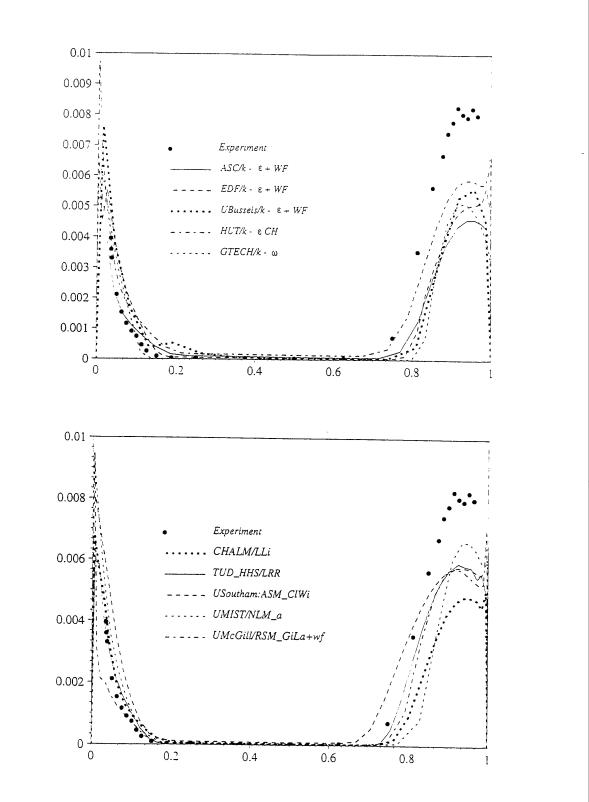 Fig. 5 shows the final development of the secondary motion 4.5 H downstream of the bend and the k contours 1H from the bend (not available at 4.5 H). Now the pressure-driven motion on the floor has pushed up the vortex along the left wall, which terminates the jet-type flow on this wall. Underneath, in the experiment the clockwise vortex originating from the contraction is still visible. This structure has, however, vanished in the computations although there are some slight traces still visible in the GTech and UMIST results. Most computations now show a single vortex, which is generally wider and located closer to the corner than in the experiments. Numerical diffusion now probably hides the effects of the turbulence models. The predicted k contours all show a maximum in the region of the longitudinal vortex, in agreement with the measurements. On the outer wall there is now a wide region of high k, the extent of which is under-predicted by virtually all models but perhaps least so by the ASM. The level is also generally under-predicted and an explanation could be again that Taylor vortices may have been generated on the outer wall with concave curvature including some temporal instability counted as turbulence. The EDF and TU Delft calculations show such instabilities, but the mesh was probably not fine enough to properly resolve the longitudinal vortices. 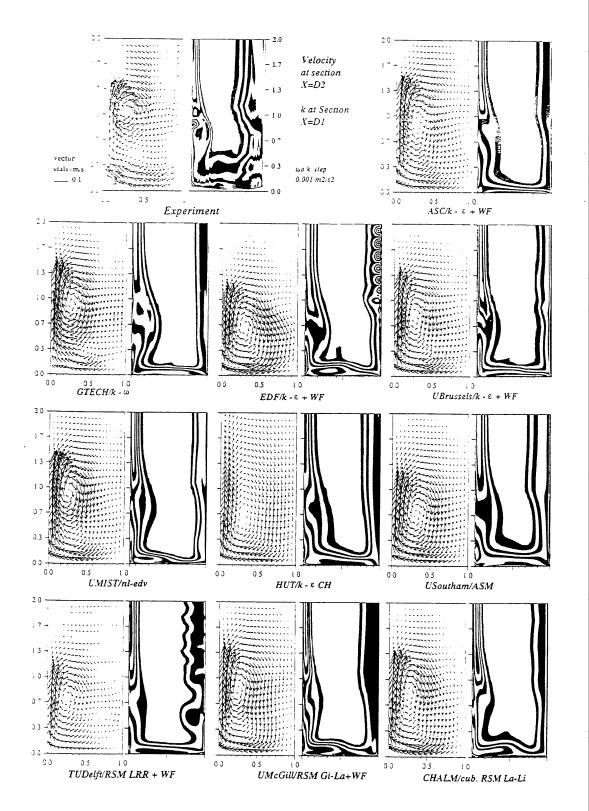 Figure 5: Secondary-flow velocity vectors (at D2) and k-contours (at D1)

The distribution of the friction coefficient Cf along the wall is shown for stations 15° and D1 (0.5H downstream of the end of the bend) in Figs. 6 and 7. Upstream of the bend the friction coefficient on the inner and outer wall is nearly the same, and the level is roughly reproduced by most models, with a tendency of being a little high. Moving through the bend, Cf develops strong asymmetry between the inner and outer walls, first reaching higher values on the inner wall, and at the end of the bend higher values on the outer wall. At 15°, most models capture the increase of Cf on the inner wall fairly well, probably because it is mostly due to the higher axial velocities there. Also, the eddy-viscosity models do a good job and are fairly close together, while there is a rather wide spread among the RSM. Near the floor, where the vortex pair induces a <<W >> shaped Cf profile, the agreement with the experiments is not so good. At the end of the bend, where the distribution of Cf has been reversed, none of the eddy-viscosity models show sufficient asymmetry while the RSM calculations of U. McGill and Chalm do a good job, but only the latter is correct at both sections. Here is some evidence that stress-equation models account better for the effect of curvature on turbulence than do eddy-viscosity models. When moving from the floor up the inside wall, the lower values of Cf between s = 3 and s = 2, associated with the wall-jet structure of the secondary motion, are not predicted by any model. The iso-levels of axial velocity show that this is a region of very thin boundary-layer thickness, which is not entirely captured by the models. Finally, the sharp dip in Cf at s = 2 corresponds to the vortex structure at the end of the wall jet, moving low-momentum fluid away from the wall. This phenomenon is reasonably well captured by most models. 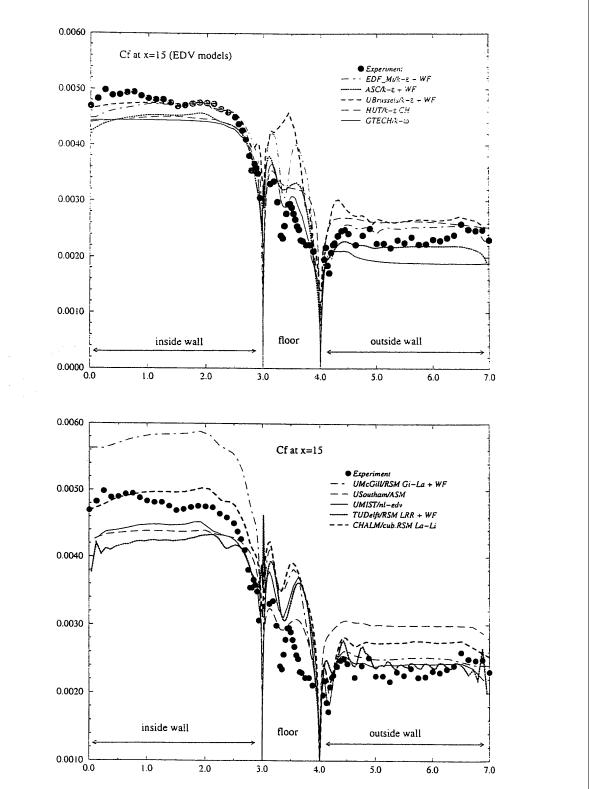 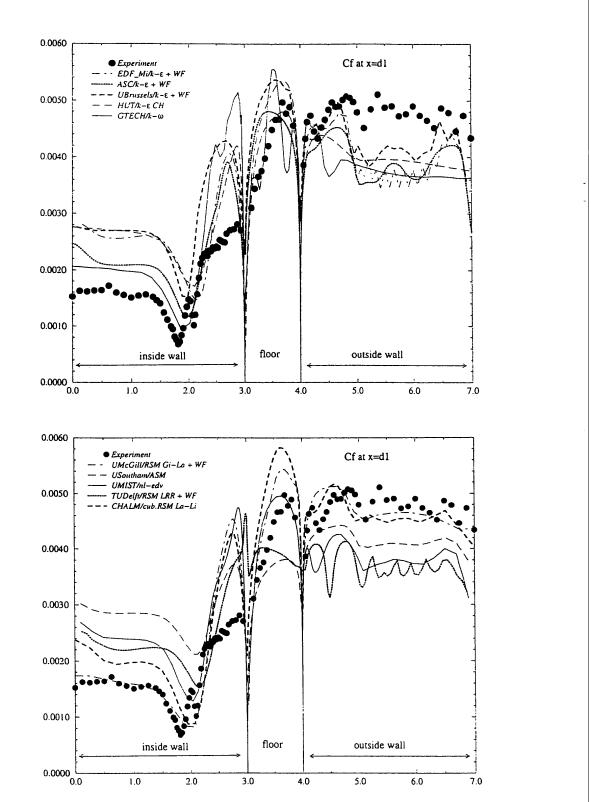 Altogether, the results for this test case are not entirely conclusive. Certain stress equation models reproduce some of the details better than eddy-viscosity models but overall a clear-cut superiority is difficult to discern. The effect of spatial resolution must be investigated, but this would require considerably finer meshes with more than 1 million grid points.