The computations by Andersson et al. (1993) gave the following main results: besides the shortcomings following from the use of wall functions (e.g. the inability to capture the near-wall peak in the distribution of the streamwise turbulence intensity), the RSM closure gives an adequate prediction of the mean flow and turbulence characteristics. The k-ε computations fail to reproduce the experimentally determined growth rate and wall friction, which are overpredicted.

The same general results as indicated above were obtained with the standard k-ε model using the commercial codes PHOENICS, FLUENT, and CFDS-FLOW3D (Hemström, 1995). With the same grid, turbulence model, and boundary conditions, the results were almost identical for the three codes, giving confidence to the numerical solutions of the problem.

Sample results from some ARSM and RSM models are presented in Figures 11 and 12. These computations show good agreement with experimental data on both mean velocity and skin friction.

Computations using k-ε with wall functions do in general fail to predict growth rate and skin friction — overpredictions of the order 20-30 % are common. Some of the near-wall two-equation models appear to predict the growth rate quite well, while Cf is slightly overpredicted. The unique characteristic of the wall jet that the point of zero shear stress does not coincide with the point of zero mean velocity gradients cannot, of course, be predicted with such models. 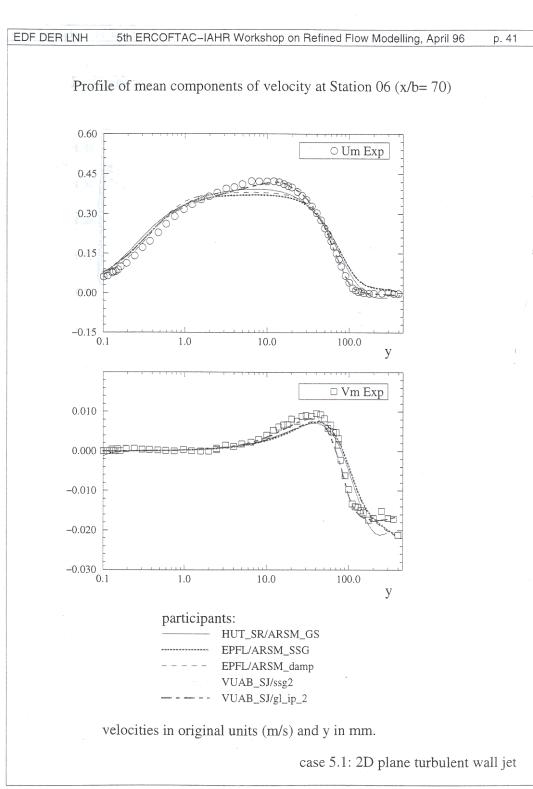