The parameters that define the flow regime are the inlet Reynolds number, the nondimensional heating rate (based on wall heat flux), the inlet pressure and gas temperature distribution and the wall temperature. The principal derived quantities, by which the success, or failure, of CFD calculations is judged, are the predicted wall temperatures compared to measurements and the predicted axial development of mean streamwise velocity and mean temperature compared to the measurements at three to five elevations. No measurement of any turbulent quantity is available.

The basic test section is the same for all cases. A resistively heated, seamless, smooth, extruded Inconel 600 tube of 27.4 mm inside diameter was employed as the test section. The short heated length was picked to permit high heating rates with this material while possibly approaching quasi developed conditions. Outside wall temperatures were determined with premium grade Chromel Alumel thermocouples distributed along the tube. The axial variation of the static pressure was obtained with pressure taps electrostatically drilled through the wall. A single hot wire sensor has been selected to measure the streamwise velocity and temperature in order to minimize flow disturbances and to permit measurements close to the wall. It was employed as a hot wire for velocity measurements and as a resistance thermometer for pointwise temperatures.

The heat losses were calibrated so the consequent uncertainties in the wall heat flux were below 3%. The uncertainty in velocity was calculated to be in the range of 8-10% of the pointwise value, with the larger percent uncertainties occurring near the wall. The uncertainty in temperature was typically 1-2% of the pointwise absolute temperature. These estimates are believed to be conservative since comparisons of the integrated and measured total mass flow rates for each profile showed better agreement, of the order of 3% or less, except near the tube exit.

The computer program used in the study reported here is a version of the CONVERT code(9). The governing equations are those of steady, single phase axisymetric flow in a vertical tube with no swirl and no flow reversal. The governing equations are cast in the “internal boundary layer”approximation which reduces significantly the number of terms appearing in the conservation equations and permits numerical solution by a marching technique.

The mean flow equations for conservation of mass, momentum and thermal energy arewritten in the “thin shear layer” form which results from considering flow where there is a clear principal flow direction and the main variation of velocity occurs in the direction normal to this direction. In the duct geometry considered, a circular tube, the principal flow direction coincides with the axis OZ and velocity gradients in the radial direction are dominant.

The condition of no slip is applied at the tube wall. The thermal condition at the wall is a specified axial distribution of wall heat flux (near uniform value is obtained in a few diameters).

The inlet conditions imposed are specified fully developed profiles of the streamwise velocity, turbulence kinetic energy and dissipation and a uniform temperature profile. Preliminary calculations for an unheated tube were performed to generate these profiles.

The various two equations low Reynolds turbulence models which have been examined in(xx) differ in respect of the functions fm, f2 and f3 which are used and the additional terms Π and E introduced to account for pressure diffusion of k and production of ε respectively, in the near wall region.

The functions f m, f2 and f3 and the terms Π and E are listed for each model in Table 2. No wall functions are used, the (k, ε) equations are solved in the entire domain,k=0 is the boundary condition at the wall, the wall boundary conditions for ε were evaluated as shown in Fig.2., following the recommendations of the models' authors.

Non uniform distributions are employed for the node spacing in both radial and axial directions. A fine grid is needed in the near wall region to resolve steep gradients in the mean and turbule nce fields. 101 nodes in the radial direction are assigned with the first at y+ = 0.5 and the 51th at y+ = 30. In the streamwise direction step sizes are based on Δz equals approximately two times the viscous sublayer thickness.

Numerical accuracy of the calculation procedure has been examined by conducting sensitivity tests and making comparisons with accepted results. The sensitivity tests involved varying radial and axial spacing of nodes, convergence criteria, relaxation factors and number of internal iterations. The changes observed with the most stringent conditions never changed parameters such as the Nusselt number, friction factor and centerline velocity more than 0.1%. 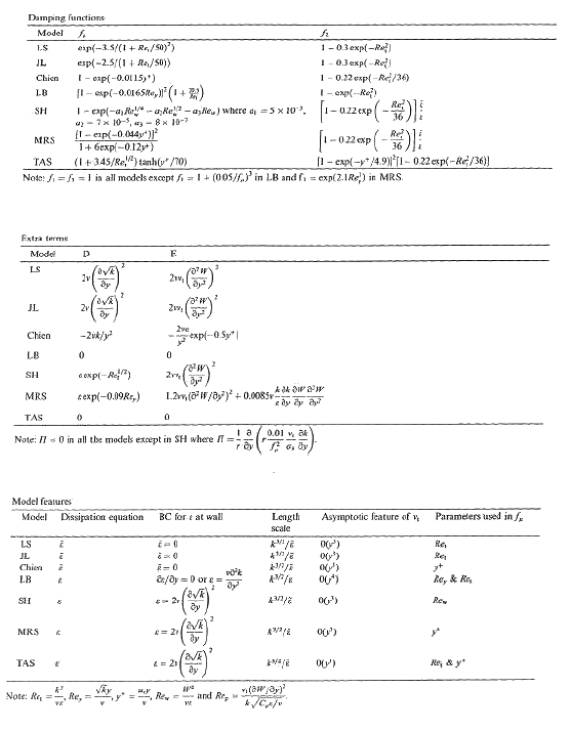