Table 1 summarizes calculation results for various global parameters such as the Strouhal number (dimensionless shedding frequency, the time-mean drag-coefficient CD, the RMS values of the fluctuations of drag- and lift-coefficients CD' and CL' , respectively, and the reattachement length LR indicating the length of the time-mean separation region behind the cylinder. The table was mainly taken from the review article of Rodi (2002), but some results that became available after the preparation of this article are also included. The experimental values of Lyn et al. (1995) are also included, but for CD a range covering also other, similar experiments, is given; the value of CD determined indirectly by Lyn et al. is 2.1. Most LES calculations yielded the correct value of St ≈ 0.13, and it appears that St is not very sensitive to the parameters of the simulation; there are however a few deviations, notably the calculations not using a subgrid-scale model. The mean drag coefficient is also predicted mostly in generally good agreement with the experiments, but there is a tendency of methods using upwind differencing to yield too high values. There is considerable variation in the recirculation length LR which will be discussed in connection with the center-line velocity distribution in Fig. 3. The fluctuations of the force-coefficients also show fairly large variation. Unfortunately there are no experimental results available for comparison, but CD' ≈ 0.13 to 0.2 and CL' ≈ 1.2 to 1.5 appear reasonable.

The Strouhal number is predicted reasonably well also by most RANS models, but the versions using the Kato-Launder (KL) modification and/or the two-layer approach yield to somewhat too high values. The mean drag-coefficient is significantly underpredicted by the standard k-ε model but roughly the correct value was obtained when the KL modification was used with the two-layer approach, and also by algebraic stress models. The RSM gives the correct value of CD with wall-functions but overpredicts it in the two-layer approach. This result is consistent with the significant overprediction of the length of the recirculation region by the standard k-ε model and its underprediction by the two-layer RSM. 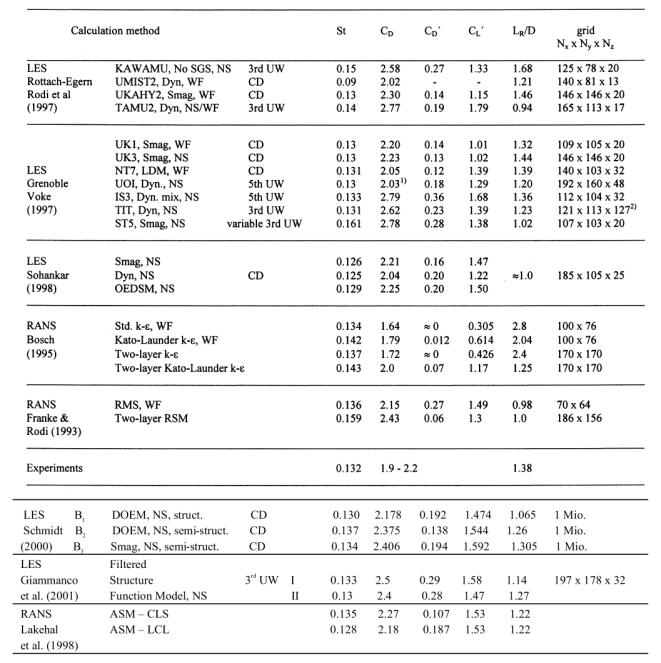 Fig. 3 shows the distribution of the time-mean velocity U along the cylinder center-line. Figure parts a) to c) were taken over from the review of Rodi (2002) and present results from the Rottach-Egern and Grenoble workshops and Fig. 3d) presents recent LES results of Schmidt (2000) and Fig. 3e) RANS results from Bosch and Rodi (1998). As was mentioned already, the experimental velocity recovers very slowly in the down-stream region or even seems to level off at a value of about 0.6 of the approch flow value. The LES exhibit a great variance in this region. Most of the calculations predict the recovery considerably faster than the experiments; those which have the slowest recovery deviate more from the experiments near the cylinder as they predict the recirculation length too short. Schmidt and Thiele (2002) present Detached Eddy-Simulations (DES) in which the Spalart-Allmaras model is used in RANS mode near the wall and in LES mode away from the wall. The results are similar to the LES results of Schmidt (2000) in Fig. 3d), but strangely they seem to improve when the resolution in the spanwise direction is reduced resulting in the limit in a virtually 2D flow field. However, the Strouhal number then is too small and the mean-drag coefficient too large. Giammanco et al. (2001) also get fairly good centre-line velocity distribution with nearly the correct recovery of the velocity but some underprediction of the reverse flow near the cylinder. It is not really clear why these calculations yielded better predictions of the velocity distribution (and also good predictions of the fluctuations); perhaps this has to do with the use of a larger calculation domain upstream of the cylinder (x/D = 6.5) and of smaller mesh-sizes near the wall and hence better resolution there than in other calculations.

The RANS calculations presented in Fig. 3e) all show too fast recovery in the far field. The standard k-ε model with wall-functions predict a significantly too long recirculation, and using the two-layer approach instead of wall-functions reduces the recirculation length. Considerable improvement is obtained with the Kato-Launder (1993) modification, especially when it is combined with the two-layer approach. When the RSM model is combined with this approach, the recirculation length is predicted too short and the recovery of the velocity is considerably too fast.

Fig. 4 presents the distributions of total (periodic plus stochastic) fluctuations along the centre-line and again parts a) and b) were taken from the review of Rodi (2002). Fig. 4a) shows the total resolved fluctuating kinetic energy of LES calculations from the Rottach-Egern workshop. The results show a rather wide variation with an almost 4-fold difference in the peak level of ktot. Fig. 4b) shows the results for the total u' and v' fluctuations from the Grenoble workshop in comparison with Lyn et al.'s (1995) measurements. The variance is now somewhat smaller (a factor of about 2), but none of the calculations is entirely satisfactory. For these quantities, the results of Sohankar et al. (2000) and also those of Giammanco (2001) agree quite well with the experiments. The LES and DES of Schmidt (2000) and Schmidt and Thiele (2002) are also capturing the total kinetic energy distribution rather well. When in the DES the spanwise resolution is reduced strongly and the flow behaviour becomes more 2-dimensional, the streamwise fluctuations are increased considerably while the spanwise fluctuations go towards zero.

RANS results for the total kinetic energy of the fluctuations are shown in Fig. 4c). Here, the total value is composed of resolved periodic fluctuations and turbulent fluctuations stemming from the turbulence models. The standard k-ε model produces a far too low k-level. This is due to the over-production of turbulent kinetic energy in front of the cylinder, resulting in a too strong damping of the periodic shedding motion in the wake of the cylinder. When the Kato-Launder modification is applied together with the two-layer approach, k is overpredicted. This is also the case with the RSM model, but the peak is now at the correct location. It appears that shedding is overpredicted with these models.

Results of LES calculations for the distribution of mean-pressure along the cylinder walls are presented in Schmidt (2000) and Giammanco et al. (2001) where they are compared with experimental results of Bearman and Obasaju (1982). Although the Reynolds number is different (Re = 10.000) in these experiments, the agreement is quite reasonable; the largest descrepancies are found along the side-wall underneath the flapping shear-layers.

Further results of LES calculations, mainly distributions of mean velocity and components of the fluctuations along the cylinder centre-line can be found in Védy and Voke (2001). The conclusions of their systematic study will be reported in the best practice advice section that follows.