The wing RAE M2155 is a low aspect ratio (3.27) swept wing that has been tested at the DERA 8ft x 6ft transonic wind tunnel in the Mach number range 06 - 0.87. The wing was mounted directly on the wall of the tunnel, so that the wall boundary layer and wing boundary layer interact. Tunnel wall interference effects have been measured, and were found to be significant especially for the higher Mach number test conditions. The computational studies, therefore have been performed as internal flow calculations, making tunnel corrections unnecessary.

At the design conditions (Mach number 0.86, lift coefficient 0.5, Reynolds number 4 x 106, based on geometric mean chord) the wing has the following characteristics: attached boundary layer everywhere; high rear loading, providing a difficult test of the calculation of boundary layer growth; and a triple shock structure on the upper surface. At off design conditions, flow separations occur.

Wing and tunnel wall pressure measurements are available for several combinations of Mach number and incidences. A set of 4 conditions (named as case 1-4) have also oil flow pictures, boundary layer measurements, and skin friction coefficient. Normal force coefficients have been calculated from the measured pressure distribution at several span stations and integrated on the whole wing.

The wing RAE M2155 has been the subject of many numerical simulations, and has been chosen to validate and assess turbulence models in E.C. funded project AVTAC.

Computations have been performed at QINETIQ for the case 1,2,3, and 4 by using the following turbulence models :

1) A κ-g based variant of the Menter SST scheme

2) A κ-g based EARSM utilizing a novel calibration and incorporating explicitly the variable ratio of turbulence production to dissipation rate.

and at CIRA, for the case 2, by employing the following turbulence models :

The numerical results consist of pressure and skin friction coefficients as well as velocity profiles at several stations along the wing span.

The M2155 test cases were specifically intended for the validation of CFD methods, as aeronautical design tools. The test geometry, consisting of a wing attached to a wind-tunnel wall, is akin to a wing-body configuration, although the test flow is clearly an internal one. The importance of such configurations for aeronautical applications is obvious. The wing is swept and is of low aspect ratio, as is common in military applications. The low aspect ratio of the wing ensures that the resulting flow is strongly three-dimensional. Inappropriate modeling in the wing-wall junction, for instance, can affect the computed flow over a significant fraction of the span. The wing design and test conditions probe the buffet and separation boundaries at the edge of the flight envelope, these boundaries being of importance in both civil and military aircraft design, and providing a considerable challenge to numerical flow solvers. The flows are complex with three-dimensional separations and triple shock structures. The boundary layers are subjected to strong adverse pressure gradients (the trailing edges being heavily loaded), a regime which is difficult for numerical methods but of great importance in wing design.

The simulation of this kind of flow represents a severe and relevant test to assess the ability of the computational methods. The prediction of the shock waves system, of the separation and reattachment lines and of the pressure recovery behind the shock and in the trailing edge zone are the challenges for the turbulence models.

The design and assessment parameter are the aerodynamic coefficients.

Normal force coefficients have been calculated from the measured pressure distributions and integrated on the whole wing. It is therefore possible to determine inviscid values of the aerodynamic coefficients.

The working section of the DERA transonic wind tunnel is about 5.5 m. long with a cross section of about 8 ft x 6 ft, i.e. 1.829 m. span-wise from root to roof, and 2.438 m in the normal direction. The wing was mounted vertically through the floor with its apex about 3.17 m. ahead of the downstream end of the working section. The two side walls of the tunnel were located at ± 1.33*Cr, with Cr the root chord of the wing.

The M2155 wing has the plantform in Figure 1 and has the following reference dimensions :

The geometry is defined by 33 measured sections. A file is ASCII format with 145 points for each section is available. The transition is fixed at 5% of the local chord, and a geometric definition of this line is also available. 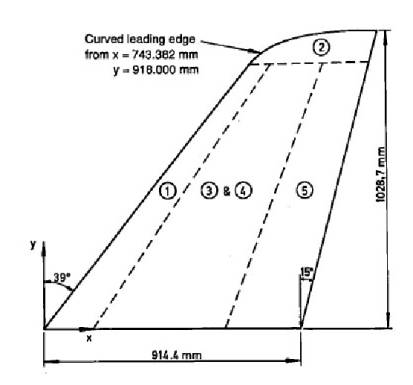 A group of four test conditions, as summarised below, has been chosen for a more detailed study. All the four conditions are at Reynolds number 4.1x106 and at different Mach numbers and incidences.

The Mach number is 0.744 and the angle of incidence is 2.5°. Flow separation does not occur and there are no strong shock waves. The boundary layer on the lower surface experiences significant skew aft of mid-chord.

The Mach number is 0.806 and the angle of incidence is 2.5°. A triple shock wave occurs over the inner half-span of the upper surface. Outboard of this there is a single shock which provokes local separation. The lower surface flow is similar to Case 1 but with greater skew. On the lower surface no shock waves are present, and the adverse pressure gradient and the sweep of the wing causes a deviation of the flow from the free-stream direction up to 45 o degrees. The oil flow visualization on the upper surfarce of the wing is presented in Figure 2.

The Mach number is 0.843 and the angle of incidence is 1.5°. A triple shock wave occurs over the 80% of span., although the flow remains attached everywhere. A shock wave forms on the lower surface at ~80% span.

The Mach number is 0.854 and the angle of incidence is 1.5°. The upper surface boundary layer separates at the trailing edge (between 30% and 55% span) and is close to separation behind the outboard leg of the triple shock. On the lower surface in the region of the outboard shock, the boundary layer is extremely skewed (the angle between the flow direction and the wing generator is less than 10°). 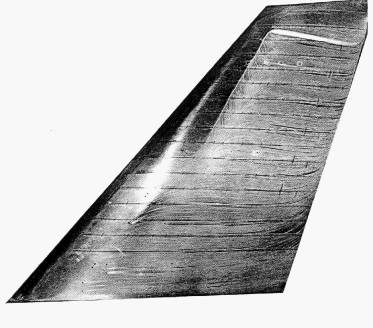