The measured velocity at the outlet of the primary and the secondary ducts of the burner are imposed as the inflow condition. Figure 9 until 16 shows the LDA measurements of the mean axial and radial velocity profiles at the exit of the primary and second ducts. The turbulent kinetic energy and the turbulent dissipation rate cannot be measured directly and are imposed.

The turbulent kinetic energy are derived from the axial and radial turbulence intensity:

The assumption v′2 = w′2 is more or less true for a fully developed pipe flow. 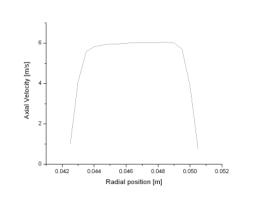 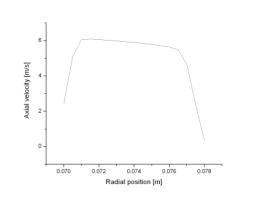 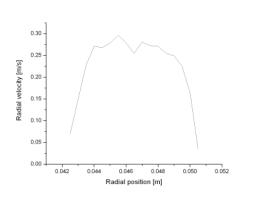 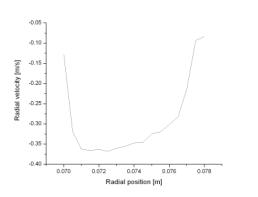 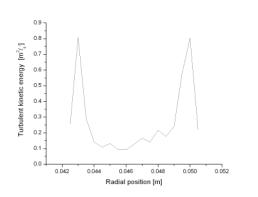 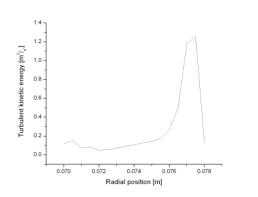 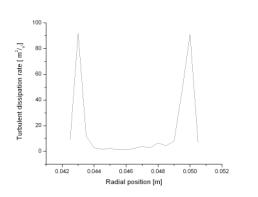 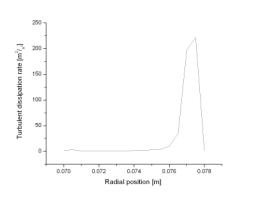 Figure 17: Axisymmetric equivalent of the outlets of the combustion chamber.

The numerical model is very sensitive for negative mass flow at the outlet. The geometry to the outlet has to be carefully dimensioned in order to avoid backflows at the downstream boundary. Increasing the surface of the outlet solves this problem.

Figure 18: The results of the stream function contours.

The solid boundaries are modeled as adiabatic walls with no-slip condition for the velocity field, except the symmetric axis.

The static pressure is prescribed to be atmospheric at the outlet.

The empirical study of the structure of the measured flow identifies several zones, depending on the axial distance from the nozzle. The nozzle region can be separated in 4 zones, which we consider below. The different zones are illustrated in the following Figure 19.

Figure 19 : Velocity vectors on some grid lines. Their amplitude gives the color.

The different zones are:

- For : there are two recirculation regions, one around the axis, and the other annular, between the two streams.

- For : there is one recirculation region, around the axis, with around it a complex annular jet, with a local minimum of its velocity.

- For : there is one recirculation region, around the axis, with around it an annular jet. This axisymmetric jet behaves as if there was only one stream.

- For : there is one axisymmetric jet, with a complex shape possessing a local minimum at the center.

- For , we are outside the nozzle region, and the burner behaves as if there was only a simple axisymmetric jet.

The numerical model is a structured mesh of one block, divided in 2 zones: An area with a high spatial clustering of grid points in the recirculation and the vortices regions, and a mild clustering at the end of the combustion chamber. Stretching is applied towards the boundary of the outlet. A study of the grid sensibility is done and discussed in paragraph 4.2. The details of the final grid, which is used for the numerical simulations, are resumed in Table 9. The details of the grid, and the number of points of the segment are shown in Figure 20 and 21. The way of clustering of the segments is given in Table 9. The total number of grid points in the longitudinal direction is 353 and in the transversal direction 289. The number of grid levels is (5/5/0). 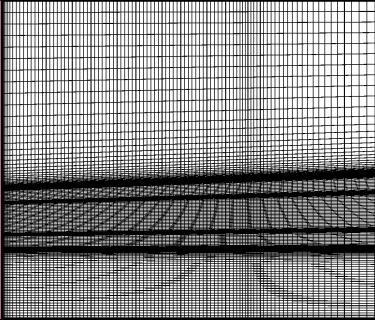 The system of equations is integrated in time using an explicit four-stage Runga-Kutta scheme and convergence towards steady state is accelerated using multigrid, combined with residual smoothing and local time stepping.

The convective fluxes are treated through a second-order central Jameson scheme with second- and fourth-order scalar dissipation, and a pseudo-compressibility method and a second-order dual-time stepping procedure are used.

The Full multigrid strategy is based on the V cycle. The system of equations is integrated in time using an explicit four–stage Runga-Kutta scheme and convergence towards steady-state is accelerated using multigrid combined with residual smoothing and local time stepping with a Courant-Friedrichs-Lewy number of three.

The preconditioning parameters β and the characteristic velocity are suggested as three and the maximum velocity in the flow yield (It is the maximum flow velocity at the inlet of the primary duct).

Turbulence are modeled by the next models:

All the quoted turbulence models were used for the CFD study, and compared with the experimental results. It will be discussed in paragraph 4: “Evaluation-comparison of test data and CFD”.

The initial solution is generated from a uniform initial field. A constant pressure field higher than the imposed pressure at the outlet is chosen, and a constant non-zero axial velocity is imposed to prevent a negative mass flows at the outlet of the combustion chamber.