Numerical simulations for the L1T2 test case have been made by QinetiQ using the BAE SYSTEMS RANSMB code. This code solves the Reynolds-Averaged-Navier-Stokes equations (RANS) with a

turbulence model is formally equivalent to Wilcox’s k-ω model [3], with g related to ω through the relation:

Thus, g reduces linearly to zero at a wall, avoiding the singularity in ω. The RANSMB CFD simulations were carried out using a multi block structured grid.

The code used for the CFD simulations was the BAE SYSTEMS RANSMB flow solver, version 9.6, which solves the RANS equations. The calculations reported here were made with a

turbulence model. RANSMB is a cell centred finite volume code with a central, Jameson type, flux approximation. Convergence to a steady-state solution is achieved by means of a four stage Runge-Kutta scheme with multigrid acceleration. Three levels of grid were available for the multigrid algorithm – fine, medium and coarse. The medium and coarse grids were obtained from the fine grid by deleting every other point in each of the co-ordinate directions. In addition, using a grid-sequencing algorithm increased the rate of solution convergence. That is, solutions were first obtained on the coarse and then medium grids to provide good initial solutions on the next finer mesh.

The mesh used in the computations was generated by QinetiQ using the SAUNA multi-block mesh generation system and consisted of 76848 cells. The mesh was of pseudo-2D type. It consisted of two identical 2D meshes in the spanwise (Y) direction, separated by one mesh unit. In mesh units, the retracted chord length of the L1T2 section was equal to 1.0. The far-field boundaries in the X and Z directions were located at ±15 retracted chord lengths. The flow solution was assumed to be entirely two-dimensional. This is achieved by RANSMB by setting fluxes in the spanwise direction to zero and enforcing symmetry boundary conditions on the two planes of constant Y.

A low Reynolds number formulation was employed for the

turbulence model. A y+ at the first grid point from the wall was chosen to be of O(1) for the slat, main-element and flap surfaces. Transition was fixed on the main-element upper and lower surfaces at 12.5 % retracted chord. This set the turbulent viscosity to zero ahead of the transition points on the main element as well as turning off the source terms in the turbulent kinetic energy transport equation in this region.

No studies were undertaken to investigate the effects of grid refinement on solution accuracy. However, the grid design has been based on long experience at QinetiQ and conforms to best practice.

For the two CFD solutions presented here, the number of time-step iterations on the coarse, medium and fine grids were 200, 1000 and 20000 respectively. This achieved a reduction in the average density residual of approximately three orders of magnitude. By contrast, only two orders of magnitude reduction were obtained for the turbulent kinetic energy (k) residual and one order of magnitude reduction for the g variable. The calculation was terminated when further convergence had effectively stalled i.e. the residuals were exhibiting a limit cycle behaviour.

The CFD data consists of surface pressure coefficients Cp on the slat, main-element and flap; and total pressure coefficients Cptot through the boundary layer and wakes at four locations. These were extracted in a direction normal to the local surface, with the exception of the profile at the wing shroud trailing edge. The profile here was extracted just downstream of the main-element trailing edge as shown in Figure 2. There was some uncertainty in the location of the zero traverse position from the experiment. To allow a reasonable comparison of the CFD and experimental results, the CFD data was shifted along this line so that the location of the main element maximum wake deficit coincided with that from the experiment. 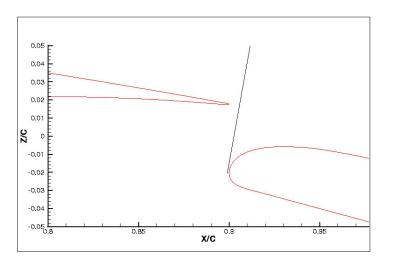