• The Drag coefficient Cd, and in particular its variations with the slant angle (see figure), is the main global parameter to be predicted. 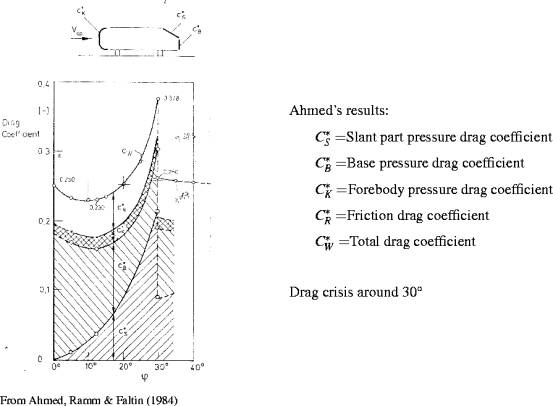 The topology of the flow is crucial for the correct reproduction of the drag coefficient: in particular, the drag crisis around 25-30° corresponds to a transition of the wake structure from a massively separated, quasi-2D structure to a complex, 3D structure.

• The contributions of the different components of the drag have different trends when the slant angle changes (see figure).

• The drag crisis corresponds to a dramatic change is the structure of the wake:

o In the low-drag configuration, the wake is massively-separated, quasi-toroïdal 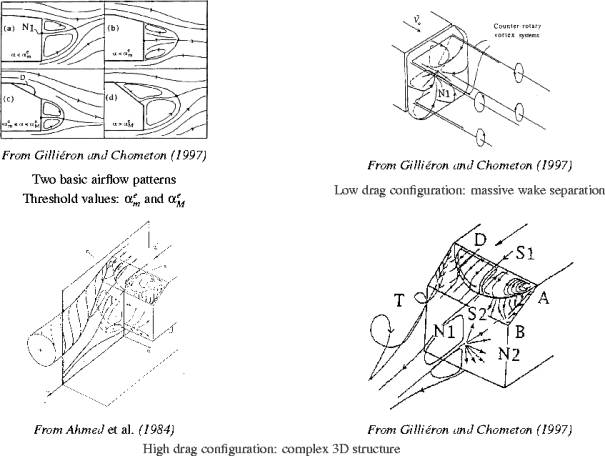 In the high-drag configuration, the wake has a complex, 3D structure: in the central region of the slant part (close to the symmetry plane) experiments show a small separation bubble, with a reattachement on the slant part. This bubble strongly interacts with the highly energetic corner vortices. Other complex phenomena are present (interaction with the underside flow, with side boundary layers, large-scale flapping in the spanwise direction, etc.), but they are not well understood yet.

C- Comparison of CFD and experiments

o Realistic pressure level and distribution on the slant part and vertical base are predicted, even with standard k-epsilon with wall functions

o However, quantitative predictions are not correct: pressure drop and drag are generally underestimated

o The wake structure transition is missed by almost all models, whatever the numerical accuracy and the conditions of the computation: pressure drop on the base is highly underestimated. Only LES and low-Re RSM are able to reproduce the complex, 3D wake structure but:

o LES (CFD9) does not reproduce correctly the boundary layer, because of the use of wall functions

• The influence of the stilts on the drag is at least 10% (CFD11), but their influence on the structure of the flow under the body is not known precisely, and this may have a significant influence on the wake of the body, which cannot be evaluated.

• The experiments were performed in a ¾ open test section. The influence of using a finite computational domain is not known.

• CFD11 estimates that the stilts roughly contribute to 10% of the drag. Stilts must be included.

• Include the ground plate: CFD3 shows that the flow without a ground plate is completely different. The ground plate should start 2L (L=body length) in front of the body to mimic the EXP2 profiles (CFD11, CFD15) (however, the importance of this condition has not been demonstrated).

• Inlet must be placed before x=-3L. Outlet must be sufficiently far to have no influence on the wake: outlet at x=5L is generally used, but no systematic study have been performed.

• Side and top boundaries: blockage is estimated to 4% in the experiments. To avoid too much blockage in CFD, the minimal recommended cross-section is 2Lx1.35L (for the full body).

• CFD11 shows that boundary conditions allowing outflow through the side and top boundaries are preferable to slip walls.

• Convection scheme sensitivity studies (CFD11) and comparaison between different teams using the same model and the same mesh show that for the type of grids described below (“marginal resolution”), the solution is sensitive to the convection scheme. Use 2nd order approximation.

• Sensitivity to other sources of numerical errors (non-orthogonal cells, interpolations, explicit terms) are suspected: care must be taken to avoid 1st order sources of error.

• Time marching: second order time marching is also advised for unsteady computations, though it is no supported by clear sensitivity studies.

• Meshes used in the CFD studies are very complex and precise specifications cannot be given. A grid sensitivity study is strongly advised, since the predictions are very sensitive to the mesh resolution. However, from sensitivity studies and comparisons between computations from different teams with the same models, the following guidelines can be provided (this are minimal constraints to reach an acceptable level of numerical error for global quantities like Cd, not for more sensitive quantities like velocities in the boundary layer):

o Surface mesh: at least 15000 cells are necessary, which leads to:

These guidelines are for ½ the body (double the cell number for the full body).

All the turbulence models used in the CFD studies give a correct wake structure and Cd trend when varying the angle for low-drag configurations. However, using low-Re models gives a better boundary layer prediction on the slant part. None of the models give the correct quantitative prediction of the pressure distribution on the slant part and vertical base, and, therefore, of the drag.

o For qualitative predictions in the low-drag configuration, simple eddy-viscosity models with wall functions are sufficient

o Quantitative predictions cannot be trusted, whatever the model

High Reynolds number models (k-ε, RSM) with wall functions must be avoided, because they generally do not predict separation at all, and always fail predicting correct profiles above the slant part.

Low-Re eddy-viscosity models predict separation provided they are free from the usual stagnation point anomaly (overprediction of turbulence production, see CFD5 study): this is the case for the k-ω/SST model (CFD6, CFD11, CFD12, CFD13, CFD14), non-linear/algebraic k-ε and k-ω models (CFD12, CFD13) and the rescaled V2F model (CFD15). This is not the case for the linear low-Re k-ε model used in CFD10. However, it must be pointed out again that these models predict massive separation, far from experiments.

Low-Re Reynolds stress models seems to be able to reproduce (too late) reattachment on the slant part and the qualitatively correct wake structure (CFD13). However, this needs to be confirmed by further studies.

LES (CFD9) is clearly able to reproduce the correct structure of the wake. However, using resolution down to the viscous sublayer is clearly unaffordable for the time being and the use of wall functions does not allow the correct reproduction of the boundary layer above the slant part.

• The potential of low-Re RSM models must be further investigated

• Wall-treatment for LES must be improved

• Since accounting for the near-wall region (low-Re RSM) and the large-scale unsteadiness (LES) have beneficial effects, the potential of accounting for both must be investigated: RANS/LES zonal coupling, RANS/LES hybrid models, Unsteady RANS, …