Difference between revisions of "UFR 3-35 Description"

Flow around bluff bodies such as circular cylinders is among the basic flow configurations yet not fully understood. The field of application of this configuration is broad, e.g. turbomachinery, aeronautical engineering, or scour of bridge piers embedded in river beds.

This flow situation was investigated in the vertical symmetry plane upstream of a cylinder mounted on a flat plate (Fig. 1). The oncoming flow is a fully-developed turbulent open-channel flow, and due to the deceleration by the obstacle an adverse pressure gradient occurs in the main flow direction. The blockage of the body leads to a deflection of the flow in vertical direction downwards to the cylinder-wall junction. Therefore, a vertical pressure gradient occurs as well, which transports high-momentum fluid from the top to the bottom part. While the downflow approaches the bottom plate, a boundary layer develops at the flow facing edge of the cylinder. When the downflow impinges at the bottom plate it is deflected in all directions: (i) towards the cylinder rolling up to a small-scale foot-vortex; (ii) in the spanwise direction around the cylinder; and (iii) in the upstream direction forming a wall-parallel jet (Dargahi 1989). This jet accelerates from the point of deflection onwards and exerts large shear stress on the bottom wall. The approaching boundary layer, however, blocks the jet pointing in the upstream direction, which leads to the well-known horseshoe vortex (HV).

This jet-vortex interaction is the characterizing feature of the cylinder-wall junction flow. Devenport & Simpson (1990) reported that the streamwise velocity component reveals a bi-modal probability density function inside the near-wall jet and underneath the HV. The upstream pointing jet can, therefore, either be in the back-flow or the zero-flow mode. The first describes a strong wall-parallel flow in the upstream direction in which the wall-parallel velocity component dominates the flow. In the zero-flow mode, the jet breaks and erupts the fluid wall-normally. Corresponding to the dynamics of the jet, the vortex oscillates horizontally and generates large turbulent kinetic energy (TKE).

The TKE distribution in the vertical symmetry plane upstream of a cylinder has a characteristic c-shaped distribution Paik et al. (2007); Escauriaza & Sotiropoulos (2011); Kirkil & Constantinescu (2015); Apsilidis et al. (2015); Schanderl & Manhart (2016). The horizontal oscillations of the HV cause mainly wall-normal fluctuations in the region of the vortex itself. Whereas, the streamwise velocity fluctuations are concentrated at the lower branch of the c-shaped TKE casued by the dynamics of the jet.

Brief Review of UFR Studies and Choice of Test Case

We studied the flow around a wall-mounted slender (

) circular cylinder with infinite height. The flow depth was

and the width of the rectangular channel was

. The investigated Reynolds number was approximately

, the Froude number was in the subcritical region. As inflow condition we applied a fully-developed open-channel flow. 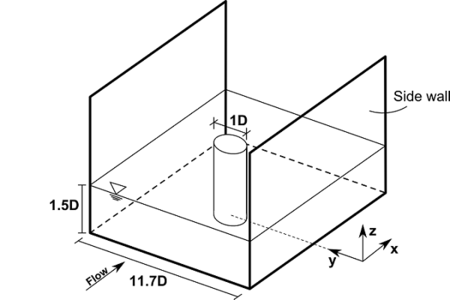