The testcase geometry is shown in Figure 2. It consists of an axisymmetric diffuser with an internally mounted cylinder along the centreline. In order to avoid separation from the diffuser outer wall and to control the pressure gradient on the inner wall, suction was applied at the outer wall at the location indicated in Figure 2.

The following quantities have been measured:

The Reynolds number based on the freestream velocity and the cylinder diameter is Re=2.8x105.

The testcase set-up has been used for additional studies with varying pressure gradients and with the additional complexity of one part of the cylinder spinning around the symmetry axis. These cases are also of high quality and recommended for validation of three-dimensional effects on turbulent flow predictions.

The measurement section for the velocity profiles of the cylinder is 761.2 mm long and the inner cylinder has a diameter of 140 mm. The inlet velocity profiles are provided (velocity and turbulent stresses). The turbulent length (or time scale) has to be constructed from equilibrium assumptions. For the ω-equation based models, it is recommended to use

can be computed from the known transformations

The quality of the flowfield has been carefully tested. The surface pressure taps indicated a variation of the pressure of less than 0.25% in circumferential direction. Circumferential skin friction measurements were within 4% of the upstream Cf.

The main obstacle in the simulation of this flow is the external boundary condition. As the outer cross-section is rectangular, but the testcase is computed axisymmetric, an artificial outer (slip) wall has to be provided. As it is difficult for some CFD codes to include the suction applied at the outer wall, the generic streamline also has to account for the effect of mass removal. The method chosen to close the domain is to integrate the experimental velocity U(x,r) profiles in the radial direction, r, up to a height H(x) defined by a constant mass flow.

The mass flow is selected in a way that the outer streamline does not interfere with the boundary layer. It also has to be ensured that it is not too large in order to stay within the measured velocity profiles. The outer streamline H(x) used in the current simulations can be found here. It has proven to be consistent with the rest of the experimental data.

The testcase was computed by a number of research groups, but has so far not been an official testcase in a validation workshop. The current validation studies refer to simulations carried out with the INS2D code of NASA Ames and to a second set of simulation using the code CFX-5 of ANSYS. Both codes are pressure-based, with the INS2D code using an artificial compressibility approach and the CFX-5 code a Rhie and Chow coupling.

A number of turbulence models have been used in the comparison. They include: 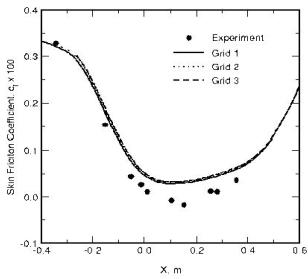 The comparison shows that even the coarse grid seems sufficient when using a second order accurate CFD code. In order to ensure grid independence, the medium grid is recommended. Note however, that depending on the near wall treatment, specific restrictions apply for the near-wall resolution. For standard wall functions, the y+ value of the first cell should typically not be smaller than a threshold value (

is a typical limit) defined by the model. This is a clear problem in terms of Best Practice Procedures, as it does not allow a systematic grid refinement. For most low-Re number turbulence models, an upper limit exists concerning the y+ resolution (

is a typical limit). It must be ensured that the near wall grid spacing is consistent with the wall treatment of the code. Note however, that for both, wall functions and low-Re models, formulations have been developed which are insensitive to the near wall grid spacing (Esch et al. 2002). Depending on the wall treatment, a low-Reynolds number grid is recommended (y+~1). Note that some low-Re k-ε models require finer near wall meshes of the order of y+~0.1.

The boundary conditions are:

Note that the flow is at low Mach number (U~30m/s) and can be computed incompressible. The pressure can therefore be set arbitrarily. Following Best Practice Procedures, it has to be ensured that the solutions are converged to a level where the critical validation quantities do no longer change. The most sensitive quantity is the wall shear-stress distribution.