Figure 11 shows a snapshot of the flow field predicted by the CFD model of DesJardin et al. [1]. With the coarse grid, the plume puffing frequency was found to be approximately 1.8 Hz, much higher than the frequency measured in the experiments of 1.37 Hz. The predictions improved as the grid was refined, with the fine grid producing a frequency of 1.5 Hz. A similar frequency was obtained with or without an SGS model. DesJardin et al. [1] also presented results from a simulation with no SGS model and a very coarse mesh (220k nodes in total and only 30 cells across the source diameter). This produced a puffing frequency of 1.7 Hz, which they considered to be an adequate estimate for engineering purposes, although the axial velocity in this case was overpredicted by nearly a factor of two. 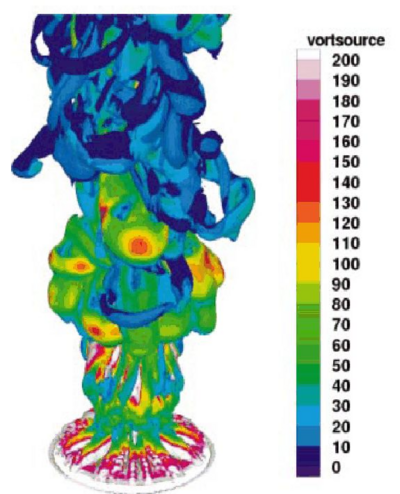 Figure 11  An instantaneous snapshot of the DesJardin et al.‘s LES predictions showing an iso-contour of vorticity magnitude at 5% of the maximum coloured according to the magnitude of the gravitational torque.

Figure 12 shows the mean axial velocity predictions at three vertical positions within the plume. The symbols are the experimental data points with their uncertainty shown as vertical lines. The predictions are overall in good agreement with the experiments. All of the results are mostly within the experimental uncertainty bounds except for the results obtained using the coarse 512k node mesh with an SGS model. For this case, the peak velocity is overpredicted by 27 %, 61 % and 67 % at the three downstream positions x = 0.2 m, 0.4 m and 0.6 m. For the coarse mesh, mean axial velocity predictions are improved when the SGS model is not used. DesJardin et al. suggested that the relatively poor predictions with the coarse grid and SGS model were due to there being a net upscale transport of turbulent energy near the plume source, from small to large scales. They noted that the purely dissipative Smagorinsky model was unable to account for this phenomenon. Using finer meshes, a greater proportion of turbulence energy was resolved. Alternatively, by removing the SGS model, the damping from the turbulence model was reduced, which improved the predictions.

The radial mean velocity predictions (Figure 12) show reasonable agreement with the experiments on the periphery of the plume but all of the simulations overpredict the radial velocity near the plume centreline. The best results are again achieved using the finer mesh.

RMS axial velocity profiles are shown in Figure 13. The coarse-grid results without the SGS model and the results on the fine grid with or without the SGS model all overpredict the RMS velocities by up to 75%. The best agreement is obtained with the coarse-grid using the SGS model. DesJardin et al. suggested that the relatively good performance for this last case is purely fortuitous and is due to excessive damping of the turbulent fluctuations. The generally poor predictions of the RMS velocity was attributed to under-resolution of the turbulent production and destruction near the base of the plume, resulting in an overly-coherent puffing motion. Radial RMS velocities (not shown) were better predicted, with fine-grid simulations falling within the experimental uncertainty bounds.

Figure 13 also shows the predicted and experimental mean helium mass fractions at the three downstream positions. The best predictions were obtained using the fine mesh without the SGS model, which were within the experimental uncertainty bounds for the two positions nearest the plume source. The worst results were obtained using the coarse-grid with the SGS model which overpredicted the experimental values by nearly a factor of two. The mean helium concentration decayed faster in the experiments than in the simulations, producing worsening agreement between experiments and simulations with increasing distance from the source.

Tieszen et al. [2] performed grid sensitivity tests using three different meshes, with 0.25M, 1M and 4M nodes. As the mesh density was increased, the amount of air entrained into the plume increased, which increased the centreline density. The best agreement between the CFD predictions and the experimental data was obtained using the finest mesh (see Figures 15 and 16). Analysis of the CFD results indicated that underprediction of entrainment with coarse grids was related to overprediction of the axial velocity near the plume source. Surprisingly, the mean radial velocity did not show significant sensitivity to the grid density. Coarse grids were found to produce overly-high resolved turbulent kinetic energy along the plume centreline, i.e. puffs that were too strong. Tieszen et al. [2] commented that this finding was consistent with a lack of mixing associated with plume puffing that was overly coherent (i.e. a lack of interaction between small and large scales).

In the simulations of Xin [3], the mean axial velocity was overpredicted at all measurement positions (Figure 17). The error increased with distance from the nozzle, approaching a factor of nearly 2 at x/D = 0.8. This behaviour is consistent with the findings of Tieszen et al. [2] and Chung & Devaud [39], that relatively coarse meshes lead to overprediction of the axial velocity. Significantly better mean velocity predictions were obtained by Chung & Devaud [39] using the same code with grid cells half the width.

The results from simulations undertaken with and without the baroclinic torque term showed that the mean axial velocity increased slightly when the term was included (Figure 17). This coincided with an increase in radial velocity close to the base of the plume. Neglecting the baroclinic torque produced lower helium mass fractions (Figure 18). The experimental mass fraction values were not shown for comparison in Xin's paper. Comparing instead with the results shown in DesJardin et al. [1] (see Figure 13), it appears that the mean concentrations decayed faster in the experiments than in the simulations. Overall, the results without the baroclinic torque were probably closer to the experiments than those with the term.

Overall, the work of DesJardin et al. [1] is encouraging in showing that the mean axial velocity and concentration, and the puffing frequency of a turbulent plume can be predicted to a reasonably good degree of accuracy with a sufficiently fine mesh. Their results for the fine-grid (2.5M nodes) and no SGS model were for the most part within experimental uncertainty bounds. The fact that the results were better without an SGS model than with an SGS model suggests that there was still too much artificial damping at this resolution. This appears to be confirmed by the later study of Tieszen et al. [2] who obtained good experimental agreement in mean quantities using a 4M node grid with an SGS model. Further model assessment has shown that grids with at least 75 cells across the base of the plume are necessary to obtain mean velocity predictions in good agreement with the experiments[1].

Fluctuations of velocity and to a greater extent concentration were relatively poorly predicted in DesJardin et al.‘s study and were very sensitive to the grid resolution. Better results were obtained using a finer uniform grid of 33M cells by Chung & Devaud [39] and with the non-uniform 2.3M grid used by Blanquart & Pitsch [40], in which cells were clustered in the central plume region. In these two studies, the RMS velocity fluctuations were mostly within the limits of the experimental uncertainty. However, there were still differences in the RMS helium mass fraction predictions approaching a factor of two in some locations.

Grids of this size require fairly long computing times unless significant use can be made of parallel processors. For the 33M cell simulations, Chung & Devaud [39] found that simulations took just over two days using 16 Xeon processors. For industrial CFD applications which may also include further complexities in addition to the plume, such as flow impingement and boundary layers, the simulations will tend towards the upper limit of what can be achieved in practice.

DesJardin et al. [1] and Tieszen et al. [2] suggested that the cause of the poor fluctuation predictions and the need to use fine grids reflects the fact that the flow is driven primarily by density gradients, and close to the base of the plume these density gradients are very sharp. Furthermore, the small-scale turbulent structures near the plume source are not solely dissipating energy. The flow in this region does not follow the standard energy cascade from large to small eddies. Instead, the small structures comprise helium-bubbles and air-spikes induced by the Rayleigh-Taylor instability which are responsible for drawing air close into the plume source and help to break up the larger-scaled “puffing” flow structures related to the roll-up vortex. If these small structures are not well-resolved, the mean plume centreline density is too low and the centreline vertical velocity too high. The larger-scaled puffing motion does not require such a fine grid to be well resolved. For this reason, using coarse grids the puffing frequency can be well-captured, even though the small-scale mixing and the mean velocity and concentration may be poorly predicted.

The results from the simulations demonstrated that coarse meshes lead to overprediction of peak axial velocities and underprediction of the mean density. The turbulent kinetic energy is also overpredicted due to a lack of small (under-resolved) scales interacting with the larger coherent eddy flow structures. To obtain improved flow predictions without recourse to very fine meshes it is necessary to use an SGS model which accounts for the effects of the unresolved Rayleigh-Taylor instabilities and the net upscale transfer of turbulent energy. Recent simulations by Burton [41] using the nLES model have shown promising results in this respect.