The flow through a sharp-edged orifice plate mounted concentric into a pipe of constant cross-section induces a flow contraction and a separation downstream of the orifice plate. The narrowest cross-section of the flow is however not located in the orifice itself, but some distance downstream (Fig. 1). The region of the narrowest cross-section is often called “vena contracta”. Further downstream of this location the flow expands again up to the pipe cross-section. Naturally, such a flow configuration is associated with a considerable pressure loss, since a great deal of kinetic energy is dissipated within the recirculation region. Therefore, such an orifice plate is often used as a flow meter mounted into a pipe (Hayward 1979). For such an application normally a special design of the orifice hole is used and the pressure tapings should be mounted at a certain distance with respect to the orifice location (Fig. 2).

Fig. 1 Illustration of the flow structure through a pipe with a sharp-edge orifice plate. 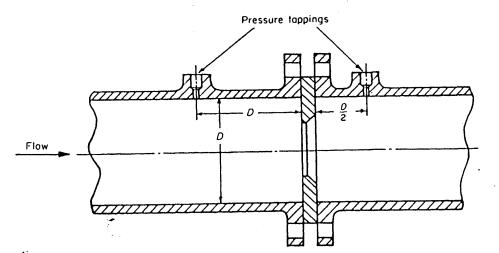 There exist of course numerous experimental studies on orifice plate flow meters in order to determine the contraction coefficient as a function of the orifice geometry and the flow rate from pressure measurements. Numerical studies on the flow through plate orifices are quite rare, although such a flow geometry is rather complex and usually the flow is in the turbulent regime. In the numerical calculations of Zhang (2001) turbulent orifice flows with regard to applications in hydropower are considered. Two configurations were computed, a single orifice with a contraction (Fig. 3a)) and two successive orifices with sharp edges (Fig. 3b)). The basic conservation equations were solved for an axi-symmetric geometry in connection with the standard k-ε turbulence model. A non-orthogonal grid was used in order to allow for a better resolution of the orifice geometry. An Ultra-QUICK scheme was applied for the convective terms while the diffusion terms were descretised by second order central differences (CDS). The result of using the Ultra-QUICK scheme in comparison of using CDS reveals, that the first one yields a better agreement with measurements of the axial velocity 0.125 pipe diameter downstream the orifice (Fig. 4). 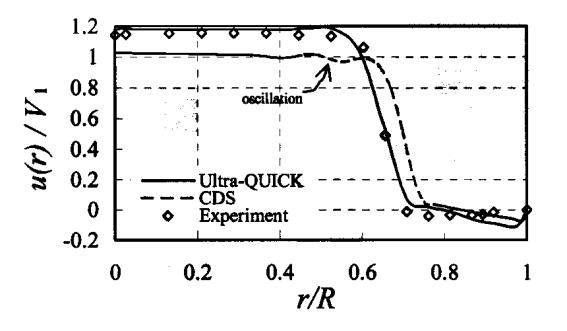 Fig. 4 Comparison of predictions using the CDS or the Ultra-QUICK scheme for the convective terms with the measured axial velocity profile 0.125 pipe diameter downstream the orifice (see Fig. 3b))

A very detailed analysis of a pipe flow through a sharp-edged plate orifice was performed by Wang (1991). This work also includes a summary of available experimental studies up to that time on flows through pipe constrictions, pipe expansions as well as orifices mounted into the pipe. Measurements were performed by Laser-Doppler anemometry applying the refractive index matching technique and the results were compared to numerical calculations. Since these results are most complete, they were selected for the following test case description. A rather incomplete description of the test case is also available at the ERCOFTAC database (case 58).