The geometry is illustrated in Figure 1, comprising a straight inlet channel in which the flow is incompressible turbulent and fully developed.

Based on the inlet channel height, H, and centreline velocity , the Reynolds Number is 20,000.

The quality of the predictions are assessed by the 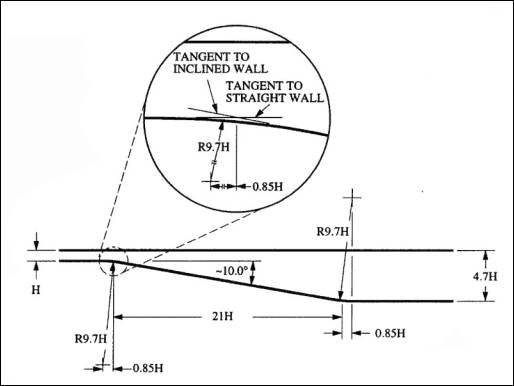 Details descriptions of the test facility and measurement techniques are contained in [2,3].

The assessment parameters datasets summarized in section 3, above, are downloadable from

These data contain sectional mass flow information, indicating local errors of up to 10% in the re-circulation and downstream in the recovery region. The error is confirmed by the measured stream-wise velocity profiles, which are “fuller” than most of the computations. The latter are by definition are mass conservative. This could be an indication of significant flow unsteadiness in re-circulation bubble and near reattachment.

The measured pressure and skin-friction coefficients do not seem to suffer similar inconsistencies.

One study from [1] allays doubts as to any inconsistency in the assumed fully developed inflow, by varying the inlet Reynolds number between 5,000 and 100,000, reporting that this had “almost no effect on the separation and reattachment locations” predicted.

A complete overview of the CFD methods is contained in [1], and is summarized here for completeness.

All groups used 2D structured meshes, with the exception of the LES and spectral method studies, which adopted 3D structured and unstructured (tetrahedral) meshes, respectively. The near-wall spacing was carefully controlled to be suitable for the appropriate near-wall model adopted (low-Reynolds number or wall-function). Mesh dependency studies were carried out in 19 out of 26 cases.

Finite volume methods were used in all but one case, together with second-order or higher, centered or upwinded, spatial discretisation. The LES and Sprectral studies used 3rd order Runge-Kutta and semi-implicit 1st order temporal discretisation, respectively.

All calculations are clearly of high quality. Good cross correspondence between similar turbulence models was achieved. Many of the studies reported the use of CFD best practices and demonstrated insensitivities to uncertainties, particularly in boundary conditions.

In [4] a later study documents the performance of the V2F turbulence model, as implemented in commercial CFD codes, and using the SIMPLE-based algorithms for incompressible flows with 3rd order spatial discretisation (QUICK) used on the momentum variables. Mesh structures and boundary conditions were consistent with those reported above.