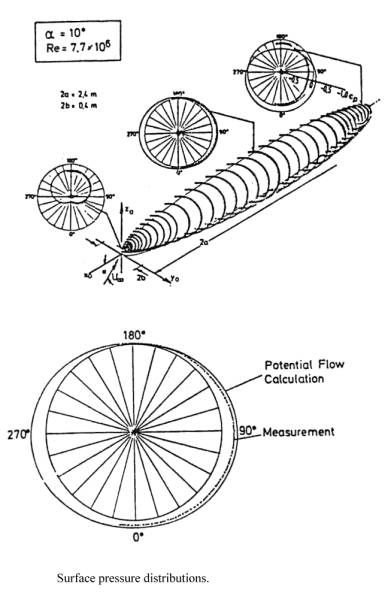 The data of the inclined spheroid are available on the CD-ROM of the ECARP book [8], and are part of the database of the network ERCOFTAC.

Experiments on a prolate spheroid, for the flow conditions reported in Table 1, have been performed at the NWG DLR wind tunnel and, at higher Reynolds numbers, at the F1 ONERA wind tunnel.

The flow around an inclined spheroid has been investigated numerically, with the main objective of assessment of turbulence models, during the E.U. funded project ECARP [8] and is part of the database of the network ERCOFTAC. Discussion of this test case can also be found in Lien (1996) [13], in Lien and Durbin (1996) [16], and in Lien and Leschziner (1996) [17].

In the project ECARP, two flow conditions, one mandatory (α = 10°) and an other one optional (α = 30°), as reported in Table 1, were simulated. The numerical methods, the boundary conditions and the turbulence models used by the partners are reported in Table 2 .

Lien (1996) [10] has applied a non linear eddy viscosity turbulence model with second and third order constitutive relation [15] to simulate flow condition 2 by employing a 653 and a 1283 nodes grids. Lien and Durbin (1996) [16] simulated flow condition 2 with a 653 grid by using the low Reynolds κ-ε model by Lien and Leschziner (1993) [14] and a κ-ε-v2model [5] with the Launder and Katos modification for the production of the turbulent kinetic energy [12]. A more detailed discussion of the results achieved by UMIST during the ECARP project is reported in Lien and Leschziner (1996) [17].