Description of the geometrical model and the test section

FSI-PfS-2a consists of a flexible rubber plate with an attached steel weight clamped behind a fixed rigid non-rotating cylinder installed in a water channel (see Fig. 1). The experiments use the same set-up as applied in FSI-PfS-1a. As a consequence all channel related parameters such as the test section geometry, the blocking ratio and the working conditions including the inflow profile remain the same as described in FSI-PfS-1a. The differences of the present investigation are related to the modified structure definition of FSI-PfS-2a. The deformable structure used in the experiment behind the cylinder has a slightly shorter length with

. The attached steel weight has a length of

. Consequently, the summation of

identical to the plate of FSI-PfS-1a. The whole structure including the rigid cylinder, the flexible plate and the steel weight has a width

. Again small gaps of about

. All parameters of the geometrical configuration of the FSI-PfS-2a benchmark are summarized as follows: 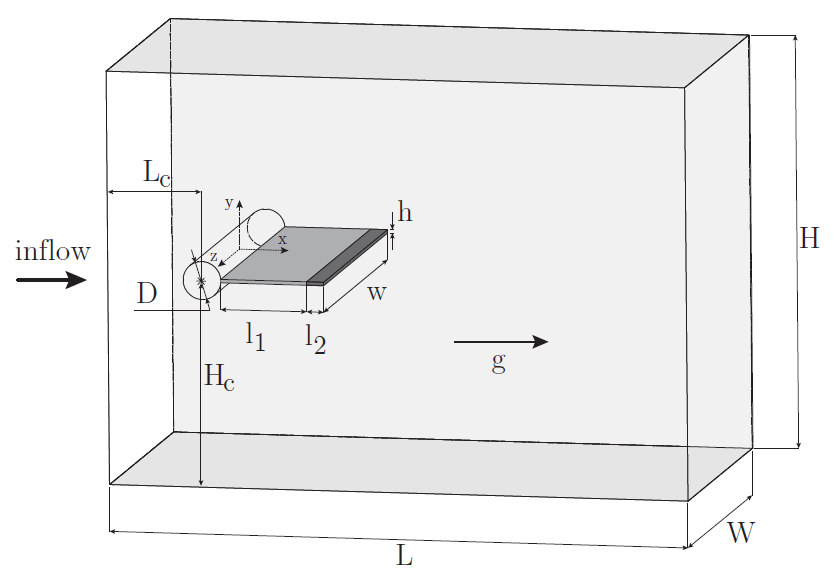 Description of the water channel

Figure 2 depicts the measured extrema of the structure displacement versus the inlet velocity and Fig. 3 gives the frequency and Strouhal number as a function of the inlet velocity. These data were achieved by measurements with the laser distance sensor explained in Section Laser distance sensor. The diagrams are the result of a measurement campaign in which the inflow velocity was consecutively increased from 0 to 2.4 m/s. At an inflow velocity of

(same inflow velocity as in FSI-PfS-1a) the displacements are symmetrical, reasonably large and well reproducible. Based on the inflow velocity chosen and the cylinder diameter, the Reynolds number is equal to Re = 30,470.

Fig. 2: Experimental displacements of the structure extremity versus the inlet velocity.

Fig. 3: Experimental measurements of the frequency and the corresponding Strouhal number of the FSI phenomenon versus the inlet velocity.

Regarding the flow around the front cylinder, at this inflow velocity the flow is again in the sub-critical regime. That means the boundary layers are still laminar, but transition to turbulence takes place in the free shear layers evolving from the separated boundary layers behind the apex of the cylinder.

The density of the rubber material is found to be

for a thickness of the plate h = 0.002 m. This permits the accurate modeling of inertia effects of the structure and thus static and dynamic test cases can be used to calibrate the material constants (see Kalmbach and Breuer, 2013; De Nayer and Breuer, 2014). Again the St. Venant-Kirchhoff constitutive law is chosen as the simplest hyper-elastic material model. Similar to FSI-PfS-1a, there are only two parameters to be defined: the Young's modulus

and the Poisson's ratio

. In Kalmbach and Breuer (2013) the Young’s modulus of the rubber was determined based on a purely static test case to

. In De Nayer and Breuer (2014) a purely dynamic test case was carried out and led to a slightly different value of

. The Poisson's ratio of the rubber is

. A detailed description of all structural tests is available in Kalmbach and Breuer (2013) and De Nayer and Breuer (2014). The properties of the steel weight are given in the table below.

Preliminary tests were conducted for the geometrically similar FSI-PfS-1a test case to identify the appropriate CFD domain size (see FSI-PfS-1). The outcome was that a consideration of a part of the whole test section combined with periodic boundary conditions on the lateral boundaries is sufficient to get reliable flow results. This configuration is denoted subset case. The geometry of the current FSI-PfS-2a test case is similar to FSI-PfS-1a. Owing to the rear mass in the present case avoiding three-dimensional deformations of the flexible structure, the restriction to the subset case is even more justified than for FSI-PfS-1a. Therefore, the subset case is directly applied here: The depth of the computational domain is not the entire test section width

, but a subset of the total width equal to the entire length of the splitter plate

yielding a quadratic plate. A block-structured grid is generated consisting of 91 blocks involving about 14 million control volumes (CVs). Note that this resolution is chosen based on the experiences made for the FSI-PfS-1a test case (de Nayer et al., 2014). Figure 4 shows the x-y cross-section of the grid. Since only every fourth grid line of the mesh is shown in Fig. 4, the angles between the grid lines and the transitions between the blocks appear to be worse than they are in the full grid. In order to fully resolve the viscous sublayer on the elastic structure, the first cell center is located at a distance of

from the flexible structure, which leads to average

values below 0.8, mostly even below 0.5 near the body. The geometrical stretching factors are kept below 1.1. In spanwise direction the grid consists of 72 equidistant cells. The inflow side is rounded in order to use a C-grid. Consequently, the computational domain in front of the cylinder is slightly larger than in the test section depicted in Fig. 1. On the right side a convective outlet boundary condition is applied. On the cylinder and on the flexible structure no-slip walls are defined. The top and the bottom of the domain are relatively far away from the flexible structure and are thus taken into account via slip walls. The lateral sides are assumed to be periodic as mentioned above.

The numerical method developed is based on an explicit time-marching scheme involving the low-storage Runge Kutta algorithm described above. Hence a small time step of

is used. This time step size corresponds to a CFL number in the order of unity.

The subgrid-scale (SGS) model chosen for the main simulation is the Smagorinsky model (Smagorinsky, 1963). It is applied with the well established standard constant

and a Van Driest damping function near solid walls. Owing to the moderate Reynolds number considered and the fine grid applied, the SGS model is expected to have a limited influence on the results. Nevertheless, in order to investigate and verify this issue, FSI simulations using the dynamic procedure as suggested by Germano et al. (1991) and Lilly (1992) and the WALE model by Nicoud and Ducros (1999) are carried out and analyzed in Section Sensitivity study. That includes a study on the model parameters and their influence on the results. 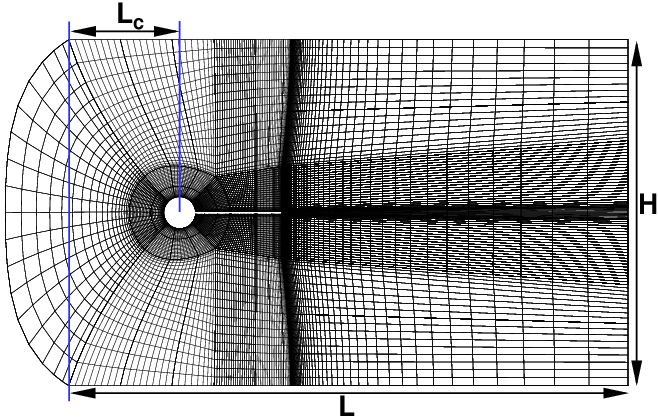 Fig. 4: x-y cross-section of the grid used for the simulation with 197,136 CVs (Note that only every fourth grid line in each direction is displayed here).

shell elements for the flexible para-rubber and

shell elements for the stainless rear mass are sufficient to deliver accurate results. The well-known Assumed Natural Strain (ANS) (Hughes and Tezduyar (1981), Park and Stanley (1986)) is deactivated in the current case and the Enhanced Assumed Strain (EAS) method is set to (M,B,T,Q,S)=(4,0,4,4,0) avoiding locking phenomena as proposed by Bischoff et al. (2004).

The flexible structure is clamped to the cylinder: All the nodes at the shell edge in contact with the cylinder have zero degree of freedom (DoF). On the opposite downstream trailing-edge, the rear mass is free to move and all nodes have the full set of six degrees of freedom. The nodes on the lateral sides have to fit to the periodic CFD boundary conditions: The x-displacements, the y-displacements and the rotations have to be the same for a lateral node and its opposite counterpart. Moreover, the periodic boundary conditions imply that the z-displacement of the nodes on the sides are forced to be zero. This special treatment of the lateral nodes is explained in detail and validated in De Nayer et al. (2014) for the FSI-PfS-1a test case.

A FSI sub-cycling algorithm is not implemented. Therefore, the same time step as for the CFD solver is set.

In accordance with previous laminar and turbulent test cases in Breuer et al. (2012) and De Nayer et al. (2014) a linear extrapolation of the structural deformation is used at the beginning of any new time step to accelerate the convergence. A second-order extrapolation is not taken into account, since it was observed that it does not improve the convergence for the current small time step size. Furthermore, a constant underrelaxation factor of

is considered for the displacements during the FSI-subiterations to stabilize the coupling. The forces are exchanged without underrelaxation. The FSI convergence criterion is set to

For the sake of clarity, the whole computational setup is summarized below. 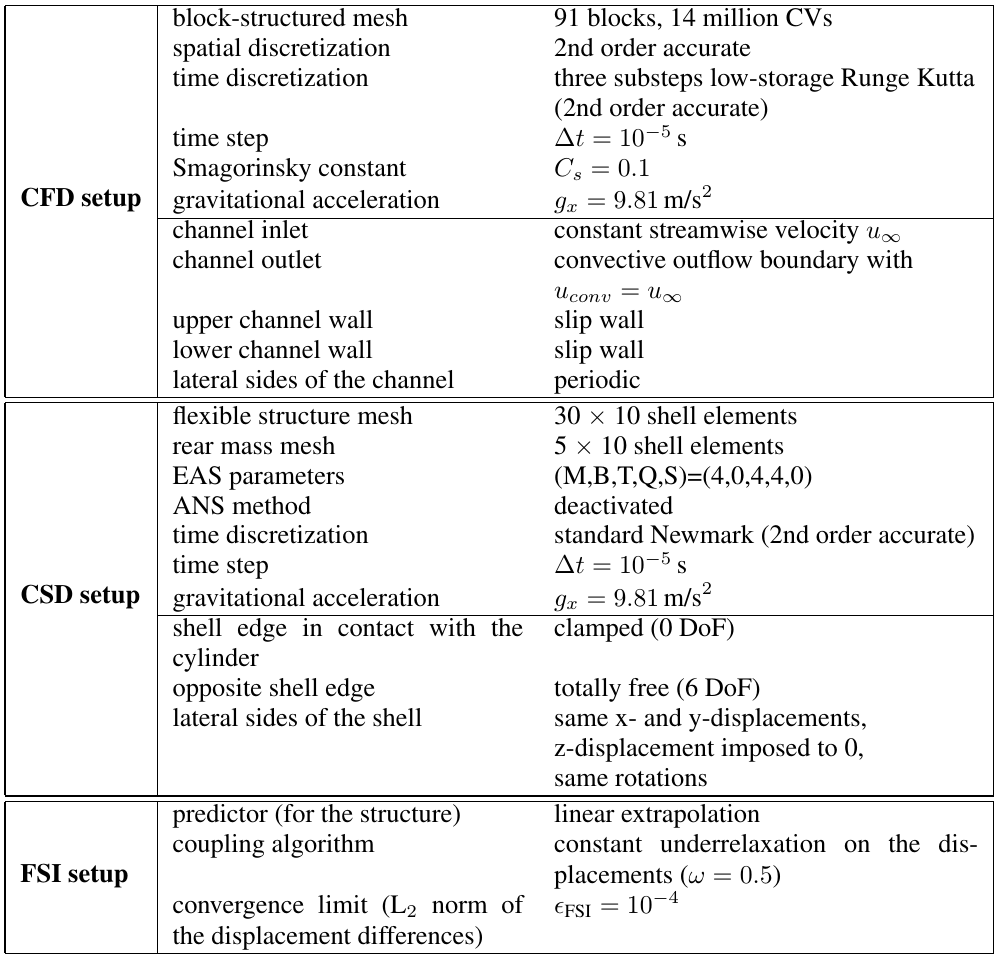 For the current FSI simulation the flow field is initialized by assuming that the entire structure is non-deformable. For this rigid configuration the turbulent flow is predicted until it reaches a quasi-periodic state. In this case the shell attached to the backside of the cylinder acts like a splitter plate attenuating the generation of a von Karman vortex street behind the cylinder. Nevertheless, quasi-periodic vortex shedding is still observed with a Strouhal number of

. Then, the structure is released and the FSI simulation begins. A time interval of about 2 seconds physical time is computed. The structure requires a few cycles until a statistically steady-state is reached. After that a phase-averaging is carried out.

The results obtained by the experiment and the simulation cannot be directly compared. Indeed, due to turbulence, the data contain a random chaotic part. This contribution has to be filtered out in order to obtain phase-averaged data which can be compared directly. A special procedure, called phase-averaging method, has been explained in detail in Kalmbach and Breuer (2013) to treat both, the experimental and the numerical data sets. For this procedure a representative signal of the FSI problem is needed. In the present case the deformations of the plate are quasi two-dimensional due to the rear mass. Therefore, the y-displacement of the flexible structure at the monitoring point close to the trailing edge is chosen for this purpose. The current FSI phenomenon is quasi-periodic. This quasi-periodicity can also be confirmed by looking at the predicted phase plane which shows a typical form of a ”8” for the second swiveling mode.

Each period found is divided into n equidistant sub-parts (here n = 23). The sub-part j of the period

corresponds to the sub-part j of the period

For a full description of the phase averaging procedure we refer to the description provided for UFR 2-13.