A detailed comparison of the LES with the test case experiment is provided in Palau-Salvador et al (2010) and here only the main findings are reproduced. Fig. 5 shows contours of the mean streamwise velocity together with streamlines in the centre plane for both the shorter and the longer cylinder. Near the cylinder walls, LDV measurements could not be carried out so that there is a blanked out region in the experimental part of the figure. Overall, the contours of velocity and the streamlines show good agreement between LES and experiments, even though the length of recirculation behind the cylinder is slightly overpredicted for the long cylinder case. The core of the recirculation is located much closer to the cylinder in the long cylinder case and could not be resolved in the experiment. A more direct quantitative comparison of results is provided below in terms of profiles in Figures 8 –  10. Fig. 6 compares contours of the streamwise and vertical fluctuations in the longitudinal centre plane for both cases. The main features are again predicted quite well, at least qualitatively (for quantitative comparison see Figs. 8 and 9) and this includes the differences between the two cases and between streamwise and vertical fluctuations. 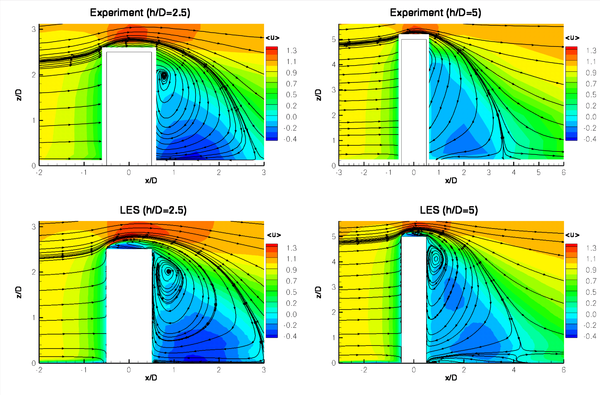 Fig. 7 provides contours of streamwise velocity and steamlines in two wall-parallel planes, one near the mid-height of the cylinder (z/h = 0.6) and the other near the free-end (z/h = 0.8). Unfortunately, measurements closer to the ground plate are not available. Near mid-height, the streamlines show the typical picture of the flow around a circular cylinder. As could be imagined from the shape of the reverse flow region in Fig. 5, the separation bubble length reduces significantly with distance from the ground and at z/h = 0.6 it is already considerably smaller than the reattachment length. Near the free-end (z/h = 0.8) a fairly clear bubble still exists for the long cylinder case, but the bubble length is reduced even more. The effects of the free-end are clearly present already and they are much stronger for the short cylinder case. Here the end effects distort the bubble in the horizontal plane and make it much smaller. All these features are predicted by the LES in fairly good agreement with the experiments.

To allow better quantitative comparison between LES and measurements, several profiles are presented in Figs. 8 to 10. Fig. 8 shows profiles of mean and fluctuating streamwise and vertical velocities along the lines at z = 0.2h and z = 0.6h on the centre plane for both cylinder cases. The velocity profiles show that the deceleration in front of the cylinder, then behind the cylinder the reverse flow region and the recovery of the velocity and the wake. On the whole the agreement between LES and measurements is again good, in particular with respect to the differences in reverse flow between the two heights considered and the two cylinders. At z/h = 0.6, a strong upflow is present near the wall of the short cylinder which is well predicted. For the long cylinder this upflow is weaker and as mentioned already could not be resolved in the measurements. It follows a strong downwash which reaches its maximum at x/D ≈ 2 and subsequently reduces further downstream. All this, and also the behaviour of the streamwise and vertical fluctuations are quite well predicted by the LES. Fig. 9 compares vertical distributions of the same quantities in the centre plane at x/D = 1. Over the entire height from the ground plate to the free stream the agreement is generally quite good with only local deviations and the differences between the two cases are overall well predicted. Profiles along the lateral direction y of means streamwise and lateral velocities and corresponding turbulent fluctuations at about mid-height (z/h = 0.6) and the downstream distance of x/D = 1.5 are shown in Fig. 10. Again, the behaviour of mean and fluctuating velocities is quite well simulated by the LES.

Fig. 11 presents streamlines over the cylinder top in the centre plane and at two horizontal planes close to the top in comparison with a dye visualization picture from Kappler (2002) and an oilflow picture obtained at somewhat different conditions by Rödiger (personal communication). The streamlines show that the flow separates at the leading edge, yielding a recirculation region that extends over most of the top, but reattaches at x/D ≈ 0.38. The general behaviour in the vertical centre plane is in good agreement with the measurements of Hain et al (2007), again for a somewhat different case with h/D = 2. Very near the leading edge the LES results indicate 2 additional small recirculation vortices that could apparently not be resolved in any of the experiments, but they lead to the formation of a saddle point on the centreline and to a sickle shaped stagnation line observed in the experiments. One of the main characteristics of the flow over the top are two foci near the outer edge which develop away from the wall into counter-rotating vertical vortices and lead to the owlface behaviour found in all oilflow pictures and in the velocity measurements of Hain et al (2007). Near the rear part of the top where the flow reattaches a saddle point can be seen on the centreline which was also observed in the oilflow pictures. Altogether, the very complex flow over the top of the cylinder was simulated very well by the LES.

Finally, in Fig. 12, for the h/D = 2.5 case, streamlines in the wall adjacent cells on the cylinder surface are shown and also a zoom of the foot region of the cylinder with streamlines in the centre plane and on the ground plate, again compared with oil flow visualization pictures made available by Rödiger. The horseshoe vortex can be seen in the lower part of the figure and a comparison with previous experiments indicates that this vortex as predicted by LES extents too far upstream. This may be due to the fact that realistic turbulence had not yet developed in the approach-flow boundary layer and that near the ground resolution may still not have been high enough. However, because the horseshoe vortex is very thin it has only negligible influence on the rest of the flow. The streamlines on the groundplate give an impression of the very complex flow field there, with the horseshoe vortex wrapping around the cylinder and embracing the wake behind the cylinder, an extensive separation region which ends where the downflow impinges on the ground, leading to the formation of a reattachment nodal point on the centreline. A little off the centreline a saddle point can be seen which is associated with the converging-diverging behaviour of the streamlines. Inside the separation region two focal points develop which are the foot prints of the arch vortex sketched in Fig. 1 and which can clearly be seen in the oil flow pictures. Altogether, this complex flow behaviour is simulated well by the LES. The streamlines on the vertical cylinder walls (top of the figure) shows the stagnation line, from which slightly upwards directed streamlines go around the cylinder walls. Near the free-end, the stagnation line splits into a fan of streamlines due to the end effect. The side view shows the separation line at a fairly constant angle of 80°. In the rear region with separation the motion is primarily upward along the cylinder, but there is also a backward component around the cylinder and these motions originated from a nodal point near the ground, as can also be seen in the oilflow picture. Near the free end, focal points develop which result from the interaction of the upward motion on the outer side and the downward motion in the centre part. These foci are also associated with the tip vortices springing off the cylinder in this region as sketched in Fig. 1. All these phenomena shown in the LES results are in general agreement with the experimental observations.