The CFD explorations have brought out several important features relevant to the prediction of vertically downward flows through an annulus with a heated core tube.

• The study of Guy et al (1999) has shown that these annular flows (with the possible exception of very low Reynolds number cases) can be treated as axisymmetric, and that for water flows it is important to include the variation of molecular properties with temperature.

• Where buoyant effects are significant the computational studies have highlighted the need for an accurate modeling of the near-wall sublayer. The usual form of wall functions, based on a universal logarithmic wall law, do not account for these buoyancy effects and hence fail to predict the enhancement of heat transfer as the buoyancy parameter is increased.

• The analytical wall function, which accounts for buoyant forces within the viscous sublayer and mimics the effects of changes in the viscous sublayer thickness, returns results in generally good agreement with the data. It thus provides an economic alternative to low-Reynolds-number models, which would otherwise be needed in order to resolve accurately the near-wall region of these annular flows

• The present calculations have not included a lengthscale correction term in the ε equation. Earlier computations showed such a term to have some influence, particularly at high heat loadings. Further calculations using the present scheme under such conditions, particularly when reverse flow may occur, should therefore also include a correction of this form.

Figure 4: Variation of Nusselt number and temperature along the heated inner wall for Re=6000, Bo=0.22.

Figure 5: Variation of Nusselt number and temperature along the heated inner wall for Re=6000, Bo=0.78.

Figure 6: Variation of Nusselt number and temperature along the heated inner wall for Re=4000, Bo=0.83.

Figure 7: Variation of Nusselt number and temperature along the heated inner wall for Re=4000, Bo=2.89.

Figure 9: Normalized Mean temperature and vertical velocity profiles close to the inner heated wall at x/deff=35.9 for the buoyant case at Re=4000, Bo=2.89. (Position of main grid nodes is indicated by symbols on the wall function solutions).

The model of Launder & Sharma employs transport equations for the turbulent kinetic energy and its dissipation rate, and includes effects of molecular viscosity, allowing it to be applied across the viscous sublayer to the wall.

The equations for the turbulent energy and modified dissipation rate

where the production rates of turbulent kinetic energy due to shear and buoyancy are:

The turbulent viscosity is then calculated as:

The stresses and turbulent heat fluxes are modelled as:

The various constants and functions appearing in the model are:

In solving the k equation over the near-wall cell, the generation and dissipation terms are replaced by cell-averaged values, defined as 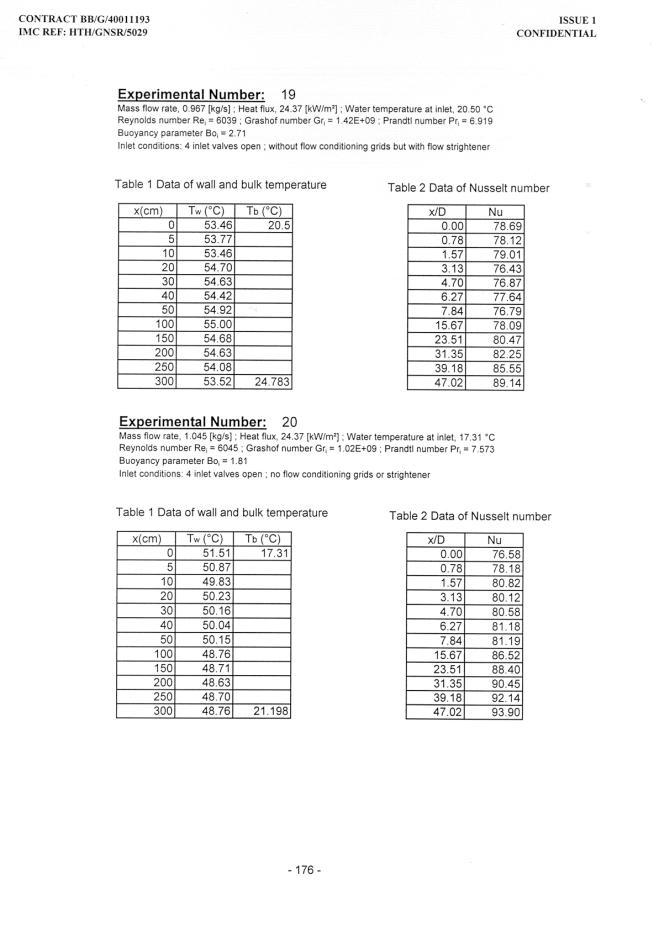