The Memorial Tunnel Fire Ventilation Test Programme consists of a series of full-scale fire tests carried out in a disused road tunnel in West Virginia in the United States from September 1993 to March 1995. The purpose of the tests was to establish the effectiveness of various forms of emergency ventilation in controlling smoke spread in the tunnel for different fire sizes. The results are summarized in an extensive database which can be used for validation purposes as well as design guidance.

Over the last 10 years, CFD has become a standard tool for assessing the effectiveness of emergency ventilation for smoke control in situations where standard prescriptive codes alone may not be applicable. This includes complex buildings, e.g. those with atria, underground stations and road/rail tunnels. At the same time, a number of high-profile incidents, with tragic results, such as the fires at King’s Cross underground station in London and in the Mont Blanc road tunnel have underlined the dangers of uncontrolled fire and smoke spread in enclosed spaces.

The increasing reliance on CFD predictions of fire and smoke spread in these circumstances means that validation of these predictions becomes increasingly important. The Memorial Tunnel fire tests represent an almost unique source of fully-scale, semi-realistic data on fire and smoke spread in a road tunnel and as such present a very pertinent application challenge for CFD in the Civil Construction and HVAC sector.

The design or assessment parameters (DOAPs) relevant in this case are:

• Critical velocity (at which back-layering of smoke in controlled)

The tunnel is 854m in length, ascending from the south to north portals with a slope of 3.2%. The main tunnel section is rectangular, surmounted by a semi-circular ceiling. The width of the tunnel is 8.76m and the centre-line height 7.86m. At each portal there is a length of horizontal ceiling, 19.2m long at the south side and 18.5m at the north side. The fire source is located 238m from the south portal with sizes 10, 20, 50 or 100 MW. 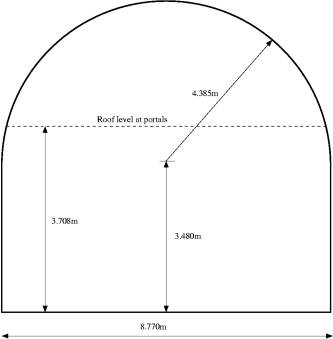 The general physical characteristics of the case may be summarized as follows:

Key parameters are the heat release rate of the fire (as a function of time) in units of MW and the Froude number, defined for example as:

is the mass-averaged tunnel velocity far upstream of the fire,

is the unheated air density,

is the difference between

and density of the hot gases from the fire,

is the acceleration due to gravity and

is the tunnel height.