The confined coaxial swirling jets flow is an important test case for CFD calculations because the geometry is simple but that flow type is very complex. It is very interesting from the flame stabilisation and mixing enhancement point of view because of the phenomena taking place in that flow type which include especially formation of recirculation zones. That flow type occurs in many engineering and industrial applications. The swirl mechanism introduced into a flow enhances mixing, heat transfer and plays a major role in stabilization of the flame in flows with combustion process. A wide variety of configurations is possible ranging from single unconfined flows under the various swirl conditions to multiple confined flows with various geometries of confinement. Many research works can be found in literature on influence of swirl on phenomena taking place in processes with presence of combustion as well as in cold flows. Unfortunately (from this UFR point of view), usually these research works concern single or unconfined flows. In these cases many numerical simulations can be found where authors present results of modelling with different models of turbulence but application of DNS and LES is sometimes only mentioned. Here, attention is restricted to confined coaxial and annular swirling jets with a circular cross section of confinement, where the literature is relatively limited.

The literature on experimental works on confined coaxial swirling flows is much more limited than on numerical ones. Most authors cite two experimental works done by So et al. and Vu & Gouldin . So at al. experiment covers two configurations with swirling external annular jet with absence and presence of nonswirling internal jet. Experimental data are reported for the mean axial and azimuthal velocities and turbulence intensities v' and w'. Vu & Gouldin performed their research works on coaxial coswirling and counterswirling jets in the cylindrical chamber and the set of data they obtained consists of profiles for mean axial and azimuthal velocities, pressure, axial turbulence intensity (

The important research works were also made by Roback and Johnson with outer swirling jet. They carefully investigated water system and the reporting values consist of mean velocity components and turbulent intensities of axial, radial and tangential directions as well as Reynolds stresses and mixture fraction.

Studies on the swirling confined jets are also available within QNET-CFD AC2-06: The confined TECFLAM swirling natural gas burner, from which the experimental as well numerical results are available. Measured data contain velocities, RMS of velocity fluctuations, cross correlations and the stress tensor and temperatures and mole fractions of CO and CH4.

Wide range of literature concerning confined coaxial swirling flows is devoted to numerical predictions. Authors concentrate mainly on problems of turbulence modelling in such flows and especially on the comparison analysis of different variants of k-ε model to predict flow field parameters. Numerical work shows that the k-ε model is not adequate for complex recirculating or swirling flows where predictions of the size of recirculation zones as well as mean velocities and turbulent fluctuations are far from experimental data. To improve the predictions, many modifications of the standard k-ε model have been proposed. Modifications like Richardson correction to the ε-equation, multiple-scale k-ε or nonlinear k-ε models have been employed to simulate swirling flows and give much better results than standard k-ε but still discrepancies between the predictions and the measured data exist. Such differences come from k-ε model assumption that eddy viscosity is isotropic while in real swirling flows turbulent viscosity is strongly anisotropic. Lei et al. applied a new ASM while Sharif & Wong applied both differential Reynolds stress transport model (RSTM) and standard algebraic Reynolds stress model (ASM), and showed that these models can better predict mean flow field than non-linear k-ε models (NKEM) and that predictions show the same trend of turbulent fluctuating velocities as the measurements.

Hogg & Leschziner compared turbulence eddy-viscosity k-ε and Reynolds-stress transport models with measurements performed by So et al. The numerical research was carried out for two outlet conditions where one was with and the second one with explicitly prescribed U velocity profile, and the results show that Reynolds-stress transport model with explicitly prescribed exit velocity U gives much better predictions of flow field parameters then other considered.

Schlüter et al. used Large Eddy Simulation (LES) for prediction of confined annular swirling jets. They simulated experimental research works by Egly, with axisymmetric 2D and fully 3D computations, however, for reasons of confidentiality results are presented in non-dimentionalized form. The numerical predictions using LES were performed for only one swirling annular jet. The complete flow configuration including second internal coaxial swirling jet were considered as too complex and postponed for further studies. Although the results for only one swirling jet seemed to be very instructive these studies were not included into the UFR description because they do not match exactly to UFR configuration ( one swirling confined jet instead of coaxial swirling jets ). However, it should be mentioned, that the comparison of the 2D axisymmetric with fully 3D calculations with experiment of Egly shows that fully 3D predictions are in very good agreement with experimental data of axial and circumferential velocities as well as of RMS values of axial and circumferential velocity fluctuations. Predictions obtained by 2D axisymmetric calculations for these flow field parameters stay very far from experimental data and generally it can be seen that results are worse than that obtained by RANS calculations. However, great care has to be taken with respect to the formulation of the boundary conditions and the simulation time.

Many numerical calculations have also been done on the Roback and Johnson configuration which was test case at 9th ERCOFTAC Workshop at Darmstadt in 2001. There can be found many numerical research, concerning Roback & Johnson experiment, with application of different turbulence models from linear k-e through nonlinear k-e, ASM, Explicit ASM to the calculations with Large Eddy Simulations. Within these research works only the outer annular jet was swirled and this configuration does not completely match UFR subject expecting two swirling jets, however, the LES calculations done by Pierce and Moin should be mentioned here. They calculated isothermal flow with swirl as well as reacting flow with swirl and heat release in the configurations of Roback & Johnson and Sommerfeld et al. The results obtained by Pierce & Moin show the good agreement of mean axial and swirl velocity profiles as well as mixture fraction predictions with experiment. Very important conclusion coming from their LES predictions is that the exit boundary conditions imposed on the confined swirling flow could influence significantly the flow field predictions. The character of the central recirculation zone can be completely different with presence of a contraction or expansion at the end of the test section, which was shown on the figure 1. 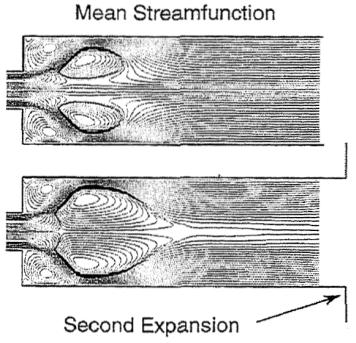 Figure 1. Effect of downstream boundary conditions on confined swirling flow. The character of the central recirculation zone is completely changed by the addition of a second expansion to the geometry.

Detailed measurements of confined coaxial swirling jets in the case of absence of particles in the flow have been done by So et al. and Vu & Gouldin, however more numerical simulations for Vu & Gouldin experiment was performed and can be found in literature. Data measured by Vu & Gouldin contain pressure as well as mean flow and turbulence properties acquired with directional five-hole Pitot probe and linearized constant temperature hot-wire anemometer. For that case also many numerical simulations have been carried out and many turbulence models have been tested, so this flow is chosen as the UFR.