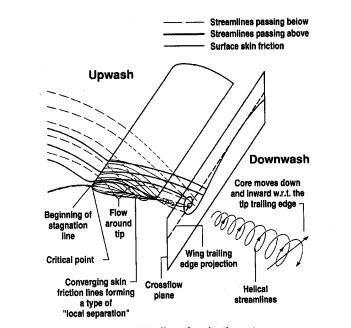 If the wing/tip flow seems complex then the tip clearance flow in turbomachinery should seem even more daunting. In turbomachinery, the proximity of adjacent surfaces above the blade leading to a small clearance gap is fundamentally important and dominates the motion of the tip clearance vortex that is formed. The clearance gap size in relation to the thickness of the blade is of major influence, and leads to different structures of the leakage flow (particularly in turbines which have thicker blades than compressors). At very low tip clearance gaps there is little shed vorticity and often no strong evidence of a tip clearance vortex. The presence of boundary layers on the adjacent surfaces and on the blades can cause additional vortices, separations and shear flows which interact with the tip clearance flow (scraping vortices, interactions with the casing wall boundary layer, endwall separation, rolling up of blade boundary layers into tip clearance vortex, free shear layer in the tip gap, tip separation vortex (Kang and Hirsch (1993)). The relative motion of the endwalls is also important such that in compressors the endwall motion is in a direction that tends to increase the flow through the tip gap and turbines it tends to decrease the flow through the tip gap. In fact it is possible to split this UFR for tip clearance flows into a long series of sub-UFR’s taking into account some of the different flow structures that can occur. This has not been attempted here and is another reason why a relatively simple wing/blade tip vortex is used as the UFR test case.