The underlying flow regime (UFR) – 2D Adverse Pressure Gradient Flows - documented here is of major importance in many engineering applications. The behaviour of turbulent flows under adverse pressure gradients is arguably the single most studied phenomena in turbulent engineering flows. It is of major importance e.g. for flows over airfoils and wings, as the separation of the flow determines the safety characteristics of the aircraft. Design tools have to be able to accurately and consistently determine the onset and amount of separation under given flow conditions. For other technical devices, the separation prediction might not be a safety concern, but has a significant impact on the efficiency of the device. Prominent examples are flows through diffusers, flows in turbomachines, flows over cars and other devices imposing an adverse pressure gradient on the boundary layers.

Most industrial CFD simulations are based on one- or two-equation eddy-viscosity models. The most widely used model is the k-e model of Jones and Launder (1972). A popular alternative is the k-w model of Wilcox (1993). It was found in numerous studies that these standard models severely underpredict the sensitivity of the boundary layer to pressure gradients. Particularly the e-equation based models have shown a strong tendency to underpredict the onset and amount of separation.

For aeronautical applications, optimised eddy-viscosity turbulence models have been developed with improved separation prediction capabilities (Menter 1994, Spalart Almaras 1994) in the late 80’s and early 90’s. These modern turbulence models offer a level of accuracy for the prediction of the separation line, which is sufficient for most engineering applications. This judgement is supported by numerous validation studies, which are however mostly limited to two-dimensional and axisymmetric flows. For three-dimensional flows, the evidence is much weaker, mainly due to a lack of experimental data and the increased validation effort. In addition, progress has been made with more complex formulations based on Explicit Algebraic Reynolds Stress Models (EARSM) (Gatski and Speziale 1993, Wallin and Johannson 2002) or Second Moment Closure (SMC) (Launder et al. 1975, Speziale et al. 1991, Wilcox 1993) models to properly predict the separation onset.

Figure 1 shows a typical comparison of velocity profiles for an asymmetric diffuser (Obi et al. 1993). The picture is not intended for a detailed discussion, but to show the principal behaviour of current turbulence models using the k-e and the SST model as an example. The k-e model clearly fails to predict the separation observed in the experiment. It therefore misses the main characteristics of this flow. The SST model avoids this deficiency and gives a much more accurate representation of the velocity profiles in the separation zone. On closer inspection, the model shows a slower flow-recovery downstream of reattachment than observed in the experiment. It was found in numerous studies that all RANS models, which give the proper onset of separation, predict a reduced flow recovery, and in more severe cases a prolonged separation zone (for very detailed turbulence model validation studies, see ERCOFTAC , 1999, 2002). 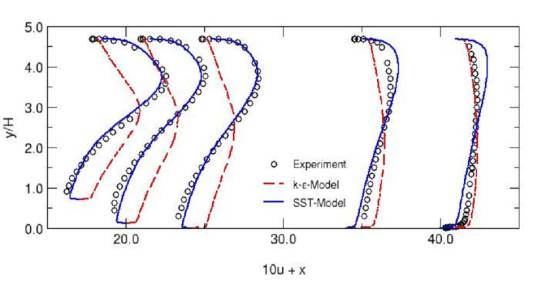 Figure 1. Velocity profiles for asymmetric diffuser. Comparison of the k-e and SST model with experimental data.