The SE 1050 turbine blade cascade was designed at ŠKODA Plzeň for transonic operational conditions, and represents a section view of the rotor blade of the last stage of a steam turbine of large output. The scheme of the cascade is given in Fig.1. The basic data of the cascade are given in Table 1. The blade cascade with profile coordinates is described in detail by Šťastný, Šafařík (1990). 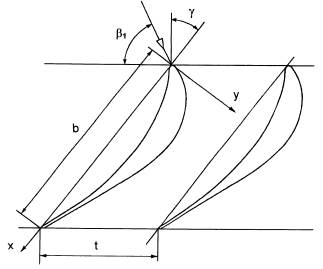 The suction side of the profile is designed to produce supersonic compression where the transition of the laminar boundary layer occurs near the beginning of the rear straight part. The trailing edge at the pressure side is designed to suppress the inner branch of the exit shock wave, see Šafařík et al. (2003).

Measurements were carried out in the wind tunnel in the High-Speed Laboratory of the Institute of Thermomechanics AS CR in Prague. The blown-down wind tunnel connected to the vacuum storage has a turnable test section that is 160 mm in width and 220 – 600 mm in height depending on the cascade stagger. Measurements were performed using a blade cascade consisted of 8 profiles CE 1050 (chord b = 0.1 m, length h = 0.16 m). The maximum error of inlet angle setting is 0.1 deg. The experimental facility provides the possibility of pneumatic and optical measurements in the range of Mach numbers up to M ≈ 2. The tunnel is equipped with a Mach-Zehnder interferometer (mirror Ø 156 mm) and schlieren optics, both can be used either with a nanosecond spark source or a Video system. A semi-automatic traversing device together with a digital measuring system is used to measure cascade losses as well as other aerodynamic data.

For transonic flow through the blade cascade, the governing parameters are the inlet Mach number, the inlet flow angle, the isentropic outlet Mach number, and the outlet Reynolds number based on the profile chord. The tunnel allows the measurement in the turbine cascades within the range of exit Mach numbers (0.5; 2) and inlet angles β1 (30; 150) deg. The flow in the blade cascade was investigated within a wide range of exit Mach numbers and inlet angles by the Mach-Zehnder interferometer. Test data are based on interferometric pictures taken for various flow conditions. The density difference between two adjacent fringes is given by the wavelength of monochromatic light and the wind tunnel width by the relation Δρ = 0.011858 kg/m3. Detailed description of the evaluation procedure is given by Šafařík (1996).

The basic series was made for the inlet angle β1 = 70.7 deg with the exit isentropic Mach numbers changed in the range (0.489, 1.387). The measurement covers the values from low subsonic to supersonic exit velocities including the transonic region. Additional experiments were carried out for extreme values of incidence i = 70.7 − β1 covering the range from i = −67 deg (very small loading) to i = +30 deg (overloading conditions). 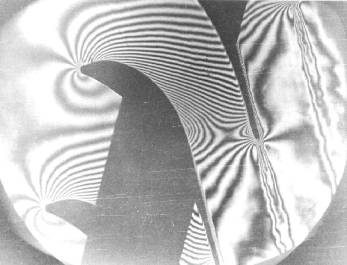 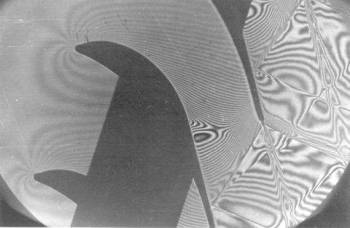 The modern explicit or implicit schemes have been used for solution of the Euler equations and the Navier-Stokes equations (TVD, WENO, ROE, AUSM high order schemes). The H-type grid, multi-block O-H grid, and structured and unstructured triangular grid have been used for numerical simulations. As an example, the adapted unstructured triangular grid used for the leading and trailing edge discretisation is given in Fig.4. The grid has approximately 3-3.5 x 104 cells refined near walls, leading and trailing edge (Dobeš et al., 2003). 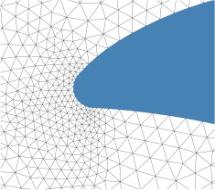 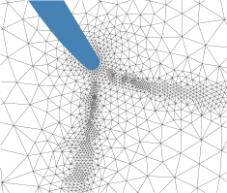 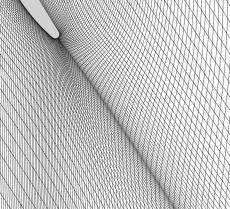 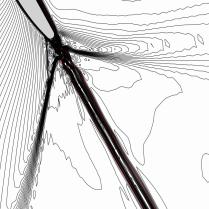 Dobeš et al. (2003) used the Spalart-Allmaras one-equation model and the ROE scheme of the 2nd order. Louda et al. (2003) used the Menter´s SST model with Kato-Launder modification of turbulence production for calculation of turbulent flow in blade cascade. The code is based on the AUSM-U splitting scheme with van Leer´s limiter. Boundary conditions on the profile were prescribed at the wall in both codes. Wall functions were used as wall boundary conditions in calculations made by the code FLUENT 5.0.